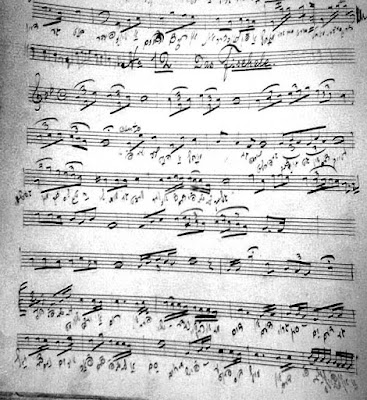 Click for a larger view of this first page of the manuscript for Dos fishele (spelled here Das fischele) which back in the day, according to Zhelonek, was sung by "Uberkantor Hornshtein."

It was written by fervent Zionist Moyshe Ratner (I discussed and recorded another of his hits at my other blog: Di yidishe fon at yiddishpennysongs.com.)

I was lucky enough to find the album "Jewish Folk Songs of the Past and Present" on which this song appears. I didn't have the stamina to put captions on the video, but here is Jacob Haas singing the song:

UPDATE:Long after writing this post I found a recording of Judy Bressler singing this song on the Klezmer Conservatory Band album: A Taste Of Paradise released: 2003


Below, find the original song sheet, the transliteration, and my translation from the Yiddish:

Click for a larger view of the song as it appeared in the Itzik Zhelonek collection:

The fish once lived in the Jordan and felt very good in the river. He was always swimming around, living and laughing for happiness (didn't know what to do) Suddenly the fish is away from the river, with endless troubles. Now he wanders around everywhere in fresh water rivers, from the great sea to the salt sea which is poison for him. When he (grabs a destiny), but the fish is glever and full of happiness to go back into the Jordan.

The Jew and the fish are alike, they wander the world. The Jew wanders like a fish in the vast ocean and never comes to the shore. If it happens that he'd like to sit on a bit of ground people tell him to keep moving, go! You're a stranger, a Jew, there's no place for you. The Jew stands on his land and takes his walking stick in his hand and always wanders in different worlds, from land to land, from city to city, which is poison for him. The enemy opens his mouth and grabs the Jew without a shudder. The Jew is clever and also, goes back, full of joy, to Palestine.