Click the album cover to listen to and/or buy this track from our Nervez! cd. 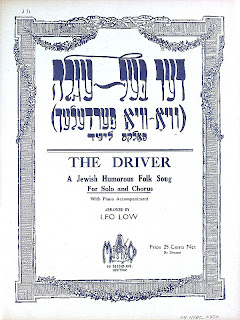 Way back when, I paid a fortune for this piece of sheet music, only to find that it was just a tricksy version of what can be found in many (free) Yiddish folk song collections. Leo Low (along with many other composers and arrangers) took folk songs like this, fancied them up, and sold them (and copyrighted the arrangements).

I went back to one of the simpler folk versions when I recorded this.

Zhelonek's version is the only one which mentions hemorrhoids, it was sung by cantor Borenstein.

You can find the song in the 1918 Jewish Song Book for Soldiers and Sailors. It was recorded on Syrena Grand Record 5329 as Der Balagule 'volkslied' by Oberkantor S. Kupfer.

Here's a 60-second video made from my recording, on which I played the same two or three notes on the piano the whole way through and then overdubbed concertina, viola, and violin:

My translation from the Yiddish:

I travel around in a crowded wagon, four horses across
Gloom, a blizzard, the world can't be seen
The path is covered with snow
Go, horses, go eagles, raise your heads high
Carry the people, shake their bones, go like smoke

One person asks: Sir, go quickly, I need to get to good people.
A second asks: go slowly, oh, my hemorrhoids,
Go horses, go eagles, don't listen to what the people say
What do I care about good people or hemorrhoids?
Go! An inn isn't far away.

We arrived at an inn late at night
We find a German (modern Jew) there by the wagon
A Jewish accountant with an iron mind and he drinks till day
Oy, inn, oy German, long years to him!
Give me a cup, but a big one - Go! Give two!

Take a cup or two, yo, my German smiles and gets happy
I drank away the horses, I drank away the wagon
I came home with the whip..
Yo, wife, my dove, there isn't even a penny for Shabbos!
But don't worry, don't complain - there's a God.