A volekhl - a song about a Wallachian dance, Yiddish folksong as printed by Itzik Zielonek

UPDATE: to add this Instagram 60-second video. The dancers you see on the video are performing A Wallachian dance, but whether it is THE Wallachian dance the writer of this song had in mind - I have no idea. Probably not.

Or you can click the album cover to listen to the whole thing on our our cd Nervez! 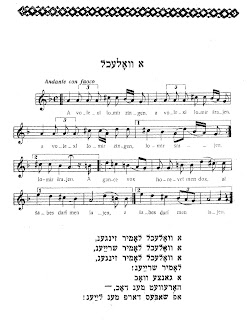 According to Wikipedia a volekhl (from Wallachia, a region of Romania) is a subset of the dance form called "freylekhs" (freylekh means "happy"). That's a 4/4 rhythm, but Joel Rubin has recorded a volekhl which is in 3/4 time.

The song "A Volekhl" commonly recorded in the past (for instance, Benjamin Chayatauskas has a very amusing version) is a version composed by Hersh Wolowitz. That is not the one found in Zhelonek.

The words Zhelonek printed are associated with a folk melody that can be found in Beregovski and other books of Yiddish folksongs (see right, for instance). That's the one I've recorded. Randy Kloko is singing with me. This is from our cd Nervez!


Translation of the Yiddish:


Let's sing a volekhl, let's shout a volekhl
All week one slaves away
On Shabbos one has to borrow money