Somebody asked me the other day, not unkindly I hope, "How is it that you can keep making so many cds when the music you love is so unpopular?" Hah, there are many musicians who love their own music more than anybody else does. If (almost) nobody is going to buy your cds, then you need to be able to make them inexpensively.

My project of recording the obscure songs beloved by record-store owner Itzik Zhelonek in the 1930s has a problem perhaps familiar to other musicians with non-mainstream tastes: I don't get many chances to perform these songs before I record them. In fact in most cases, I have never performed them. I learn them WHILE I'm recording them. If you don't believe me, ask my housemates. I approach them bit by bit. Yesterday's recording, of a complicated (for me) kale bazingen, took most of the day.

The cheapest "real" recording studios charge around $60 an hour. If you, like me, are recording material you are relatively unfamiliar with, it would take a mighty number of hours to get it all done at a studio. So here's where I made my last four cds: 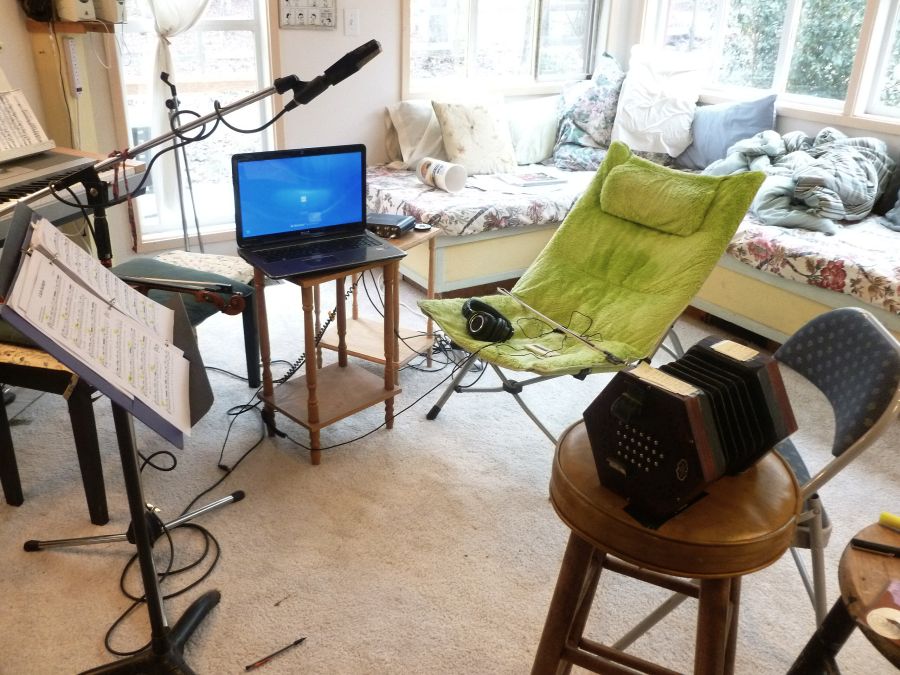 It's my living room, of course. I have a laptop, two good AKG mics I more or less inherited from Pat Sky, the free software called Audacity for editing, and the inexpensive piece of equipment that makes this all possible: a break-out box called the Fast-Track Pro made by M-Audio. This box (you see it behind the laptop, hooked up via USB) bypasses whatever soundcard is inside the laptop. I plug my mics, which need phantom power, directly into the break-out box. It has simple controls for volume etc., and I can also plug in my Yamaha electric keyboard via quarter-inch jack.

After I make my wav files, I edit them as much as I can at home. I fix the levels, make patches, etc. But I now indulge in taking the finished wav files to a "real" studio to mix them, because I don't have any speakers good enough for professional playback, and also, at that point (having messed with the whole thing in solitude for months) I need an outside ear to help me mix. I don't want to be agonizing over whether the clarinet is too loud or too soft - I want somebody else to give me his opinion.

So I go to the Rubber Room recording studio in Chapel Hill and hand Jerry Brown a flash drive with all my tracks. He uploads them into Pro Tools, mixes them, runs the finished mix to analog (I don't understand this part), runs the cut back back into Soundforge, and masters it. He uses CD architect to sequence the tracks and we add the ISRC numbers etc. I get a finished cd after 3 days in his studio. That part isn't cheap, and if I were very broke I would skip it, but it makes me happy to have a professional involved at that point.

Another way I save money: I do all my own graphics. I paint the covers myself and use InDesign to format them for the duplicating plant.

ps I don't sing or play violin sitting in that green fuzzy chair (which is one of the most comfortable chairs I've ever owned). That is my editing chair.