Or visit to the whole track from our cd of the same name: Lebedik Yankel.


This is yet another song about a guy who is not supporting his family because he's too busy praying. Well, he does have an occupation of sorts: he repairs crummy old shoes. (This guy doesn't look very lively, does he!?)

Morris Rund copyrighted the lyrics and credited Lebedeff (or Lebedoff as it says on the card in the card catalog) as composer of the music. For the sheet music I transcribed an older recording of this song sung by Aaron Lebedeff, but that cut has evidently been taken down (or I can't figure out how they spelled the title). If it was taken down for copyright reasons, it was unnecessary, as Lebedeff never renewed the copyright and the song is now in the public domain. Luckily somebody else has posted a newer version by Lebedeff (it desn't have the chorus members who were on the previous recording): Aaron Lebedeff's Lebedik Yankel.

I found the last verse not on the recording or in the Zhelonek collection, but online. 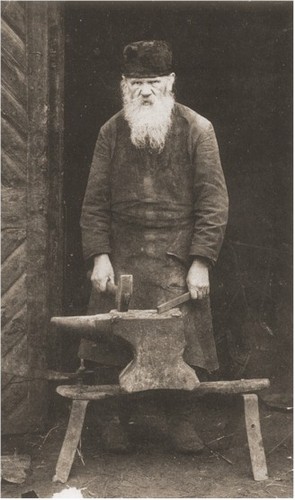 I chose this as the name of the second Itzik Zhelonek cd because it was one of the few titles I thought everybody would pronounce. I didn't use the YIVO-sanctioned spelling of "Yankl" because it would worry English speakers.

When Randy came up from Florida, he added the chorus and I added some oom-pah on fiddle and viola.


Translation of the Yiddish lyrics:

Everybody knows Yankl the shoemaker, he patches old shoes
And his wife is always shouting: "Thief, give me some money to make shabbos!"
The house is empty, not a bite to eat, winter is coming,
The children are naked and ragged and Yankl sings quietly:

Lively Yankl, don't be afraid, you have a great Creator
Wife, listen, don't worry about tomorrow, God will provide, my dove.

Today a merchant is full of troubles, his head is full of worry
Everybody beats on him, his future is uncertain
The marrow is sucked from his bones, but he laughs out loud and
sings as best he can...

And there's the tailor Shlomo, a man with a lot of get-up-and-go
His wife's quite a go-getter, too, she lies in childbirth every year
Having children is a mitzvah, a child is your wealth
He lives on the edge, but he sings table songs...

The teacher sits at home and studies khumesh and Rashi
His wife comes and asks a question:
"Yankl, advise me, we need to rent an apartment."
He scratches his shoulder and starts singing...