Ikh hob a gut harts (I have a good heart), a Yiddish theater song by Rubin Doctor

or, click the picture below to listen to and/or buy the whole song from our In Odess cd. 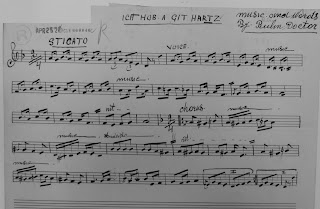 This song was quite lost and forgotten. I don't know if any recording of it survives; I found the manuscript you see here at the Library of Congress. The words were scrawled on a cocktail napkin or the equivalent.

Zhelonek writes that Sam or Sem Goldberg did record it on Lenora Records.


Translation from the Yiddish:


Everybody knows I'm a good girl, everybody says I'm genteel from head to foot
I help when I'm needed, my door is wide open
Nobody has to beg me, they'll get what they need from me

My cousin is engaged, she's always bragging about it
When her fiance Charlie comes, he complains to me
That she won't leave him in peace, she drives him from the house
If this happened with me, I'd do right by him

The girls of today go dancing, they have endless love affairs
And after they marry, instead of having one, they have four men
just like bears!
And when a child is born, though it isn't nice to say so,
Nobody knows for sure who the father was!

I never go to the movies,
Because sitting there in the dark, nothing good can come of that
Everybody knows that a girl is called a "maiden" in Hebrew
But between a "maiden" and a girl, that's a big difference