Cockeyed Jenny: a new version of the Barton Brothers hit, from a woman's point of view.

There is a wonderful guy known online as Arye Menachem but, in the real world, as Len Misikoff. He has a skill few have (and fewer still are willing to share with the world): he can listen to Yiddish songs and tease out the lyrics! I asked him to help me with Cockeyed Jenny and he graciously did so, but then it turned out the words were horrendously misogynistic, which was typical of Yiddish comedians of the time...

... so I wrote a version from a woman's point of view and Len and I batted it back and forth until the Yiddish was more or less correct. And then I recorded it with my buddies Jim Baird and Beth Holmgren from our band Mappamundi. (I'm sad we can't all be on the video but in these days of COVID most tracks are done by folks in their own homes and mixed later). Jack Herrick mixed it with me in his barn. Here it is: 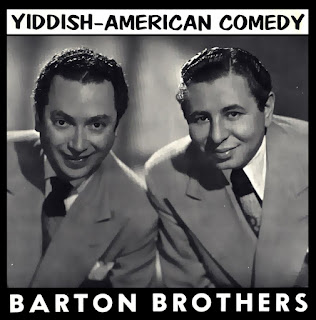 The Barton Brothers, for all their fame, are now pretty lost. Who even knows where they were born? Or when? What we do know is that they specialized in vulgar songs in Yiddish AND English, for an audience which was losing its Yiddish and so appreciated being thrown a bone (in the form of English punchlines).

Ron Robboy, who guesses they were born in the 1910s, has studied them and shared this with the Mendele listserv (excerpted):

The Barton Brothers humor was often tasteless, stereotypically engaging the Yiddish language at a crude level. Much of the comedy is bilingual (Yiddish-English), with off-color punch lines in Yiddish, if the exposition is in English; or English, if the exposition is in Yiddish. I would imagine that sociolinguists can offer some theoretical framework for this phenomenon of switching language for the naughty moment. Whatever the explanation, the Barton Brothers present a case study of what was happening to Yiddish in the United States in the years following the Second World War. The taboo subjects range from adolescent masturbation to the ubiquitous topic of sex with gentiles. The material, in short, is HILARIOUS!

[Their] musical miscegenation creates a rich bath of metaphor for the sexual transgressions the lyrics describe, and all *that* in a naughty bilingual conjugality.

Among the most amazing displays of cross-cultural referentiality which I noticed in the album is in the song "Cockeye Jenny." Aside from the last four lines, which are in English and entirely tasteless, the entire song is Yiddish, with the exception, about a third of the way through, of one couplet sung in English: "I tell you, people, it's no use talking." This is a line whose yikhes would be worth exploring. ...