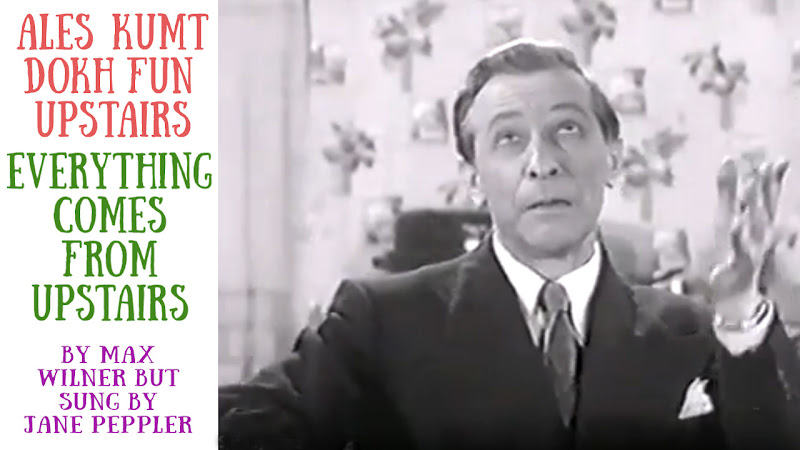 This song is found, as far as I know, only on the Youtube channel of Spookylorre. He doesn't say where it comes from, but somebody told me it was from a TV show in the 1950s. I'd love to know more!

So here is Max, mugging his way through this delightful song: Ales kimt dokh fin upstairs.

As far as I know, the song was never recorded or published, this clip is all there is. The great challenge was figuring out the lyrics.

I asked Len Mis, Lenny Misikoff, proprietor of Arye Menachem's Cornucopia of Yiddish Song, to help out. He has generously been transcribing lyrics for unpublished songs for quite some time, it's a huge favor he's doing everybody who cares about Yiddish songs. Check out his YouTube channel: Yiddish Songs with Translation by Arye. There were a few murky spots, I did the best I could... He got Yelena Shmulenson to help, so, thanks to both! Here is my living room recording from earlier today:

It would be interesting to have a date for Wilner's video. There is so much English in the text, but the heart of the song is very old-fashioned - it follows the same form we saw in Yiddish vaudeville songs of the turn of the 20th century. The idea - that everything we have comes from above - is reflected in three very different ways in the three stanzas. If anybody knows more about this tv show, please let me know. Transliteration and translation after the jump.

The modern rabbi is no Old World caricature -
Instead of a beard, he wears a red tie
But like modern students, here's one that's no blockhead,
So he asks the rabbi: Hey, smart guy:
Where does everything come from? Guns, poverty?
Where do pleasure and trouble come from?
Where do candy and hotdogs and brandy come from?
How about onions and garlic?
The rebbe answers him: You want to know where everything comes from, wise guy? Listen:

I recently rented rooms. I don't need to be creeping up stairs:
My flat is on the ground floor, in the back.
The flat isn't the prettiest. I look out the window,
My yard is full of garbage, it's terrible.
Pots and saucepans are lying there, old shoes and candles,
A mountain of ashes, a busted up sofa...
I call the superintendent and accuse him:
"Is this a yard or an incinerator?"
"Where does all this come from," I ask him, "I want to know!"
"You ask from where?" he starts telling me, "Listen:

A guy from back home, Abie Spector, wants to be an actor,
So he rents a theater in the Bronx.
He himself runs around selling tickets,
He does the acting, he sings the songs.
During all his scenes, bananas are flying.
Right away he starts collecting them!
Walking to the theater, I see him standing outside,
And he's selling bananas, three for seven dollars.
"Where'd you get these bananas?" I ask him.
He answers me, beginning to boast:
"What do you mean? You don't know where the bananas come from?"