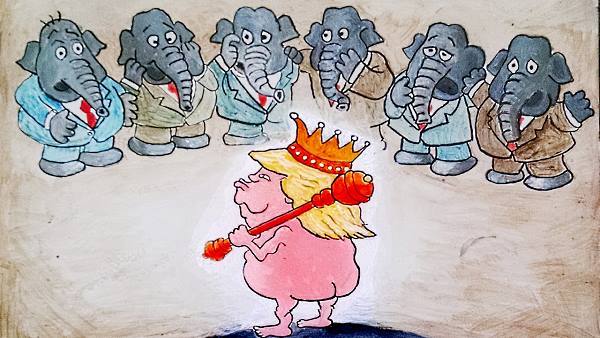 In 2015 I submitted a song to "Der Yidisher Idol" - known as "Der Idisher Idol" in Mexico City, which is where the competition took place. I got an all-expense-paid trip to Mexico City to sing in the contest, and I won. Read about me getting chosen as Grand Champion of Der Yidisher Idol 2015.

I wrote Don der Dondek for this year's competition but it was rejected for two reasons: "We don't mix politics and culture," and "You already won so you can't compete again." Fair enough.

Writing this was cathartic, and Yiddish is, as you know, an excellent language for insults. I used two dictionaries and Nahum Stutchkoff's Rhyming Dictionary and also his thesaurus. Afterwards my friends did overdubs, Randy Kloko sang on the chorus, Jim Baird played bass and Ken Bloom played guitar. Thanks guys! The translation is after the jump, if you want the Yiddish text just email me.

High over London flew the balloon
A giant swollen baby pulled by protesters
It represents a childish tyrant who clings to Satan: Don the ninny

From far off, a terrible agreement was made.
From behind doors traitorous laughter is heard.
Who messes around like this and gives an idiotic speech?
Look at our fat traitor, our Haman the criminal.

The nauseating disgusting stinking bungler!
The old dunce! The putrid fool!
The cowardly liar! The corrupt scoundrel!
Don the ninny.

Rat bastards in their red hats rush like a torrent.
They worship their son of a bitch, the orange dirigible.
They love their lecher, their chump, their numbskull, their ass licker
Who sins and lies every day.

He and Putin had a frightful understanding
He soon made himself into a secret crony.
He cavorted around with the Russian prostitutes:
Don the ninny

My only goal is to see the end of Don the ninny.