Shvayg mayn harts by Herman Yablokoff - was it really the source of the eden ahbez hit "Nature Boy" ? 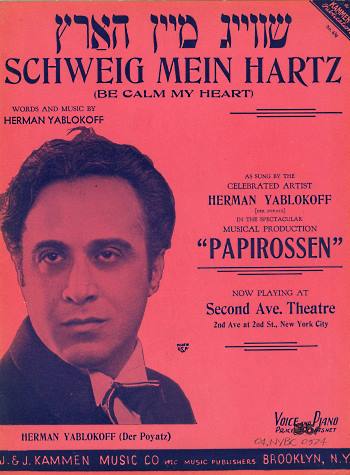 I was asked to look into this song by a reader who wrote because he'd heard Nat King Cole's hit "Nature Boy" was plagiarized from Herman Yablokoff's Shvayg mayn harts and was frustrated not to be able to find a recording of Yablokoff's song.

As with many people who say they are dying for help, when I asked him to help defray the cost of buying the expensive sheet music from Florida Atlantic University, he never responded. I went ahead anyway. 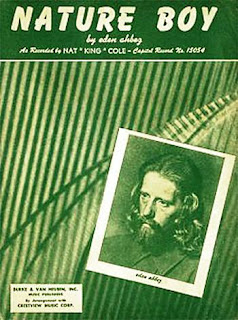 So here's a condensed version of the story: After a concert in 1947, Nat King Cole’s valet gave Cole a song chart he'd been handed backstage by a stranger. Cole wanted to record it but needed permission.

His people found the composer, eden ahbez, living with his wife and child under the first "L" of the Hollywood Sign above Los Angeles. ahbez had long Jesus hair and wore white robes and ate only vegetables, fruits, and nuts; he was one of a gang calling themselves "Nature Boys." He claimed to live on three dollars per week.

He was born Alexander Aberle in 1908 in Brooklyn, New York, to a Jewish father and a Scottish-English mother, and spent his early years in the Brooklyn Hebrew Orphan Asylum of New York. He later changed his name to (lower case) eden ahbez. 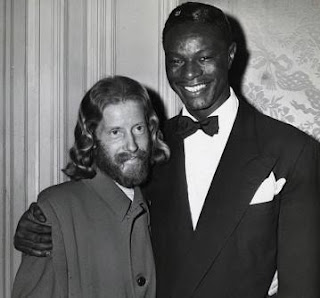 Cole's recording of the ahbez song was #1 for seven weeks. It was subsequently recorded by many other famous singers.

ahbez was then sued by Herman Yablokoff, who claimed the melody came from Shvayg mayn harts. Ahbez often claimed to have "heard the tune in the mist of the California mountains" or "in the solitude of a cave." However, he paid Yablokoff $25,000.

Was the song stolen? ahbez lived in New York City in the 1930s, during or after the period when Herman Yablokoff's Yiddish show Papirosn was doing very well on Second Avenue. Yablokoff wrote about the lawsuit in a full chapter of his 1981 autobiography Der Payatz but I haven't seen the book. However, here's another opinion, from kuvo.org:


ahbez always said that the melody had come to him “as if an angel was singing it”; Yablokoff’s response was that if the angels were singing it they must have bought a copy of his song. The similarity of both to a portion of Antonin Dvorak’s 1887 “Piano Quintet No. 2”, based in part on Czechoslovakian folk music, suggests that either Dvorak’s music or Czech folk music had influenced both Yablokoff and ahbez.

Also probably in the mid-1930s Jack Rechtseit wrote a song by almost the same name and with a similar theme. I wrote about it and recorded it a while back, see Shvayg, hertsele!

Here is the recording Aviva Enoch and I made this week of Shvayg mayn harts. She played pretty much what was in the sheet music.

Here are the eden ahbez and Nat King Cole's versions:

Yiddish transliteration and English translation of Shvayg mayn harts after the jump:

I knew somebody, a small boy, he lived alone in Russia.
He slaved away, he wandered, he rushed around, he exhausted himself, lonely as a stone.
He was condemned, his life poisoned, he was persecuted with mockery and fury
He always stayed silent, he didn't show his pain, his heart turned to stone.

The years passed, he went to America, he married, had a home,
His child was his soul, his solace. He felt peaceful and comfortable.
Fate demolishes him, he's destined to have no happiness, he can't find any peace
His striving's in vain, what good is life to him? He's out of his mind.

In cold, in rain, just as before. In the street, in the park, his voice is heard.
Though his heart is torn, nobody can know his sorrow.
He always murmurs tearfully to himself: