This song was printed by Joseph Feldman in an issue (was it the only one?) of his "Yiddish Theatrical Magazine," shared with me by Steven Lasky. This melody sounds like a folk song and the words have that feel as well, but Feldman copyrighted the song (or at least he wrote here that he did).

Note the transliteration, Mazel, we bisty mazel, and on the lyrics page it says Mazel, mazel, wie bisty mazel? In standard (klal) Yiddish this would probably be Mazl mazl vu bistu mazl? (Luck, luck, where are you, luck?) but in the first verse it says: Wie bisty fun mir antrinen? In which case I like vi (how) rather than vu (where). YMMV I guess. 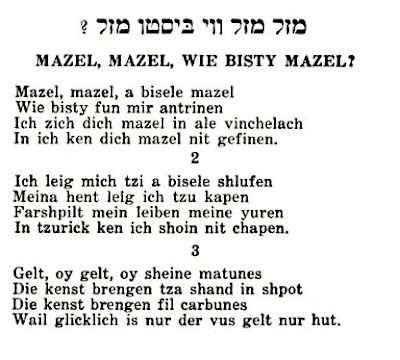 Here's my recording from half an hour ago:

Words and translation after the jump.

Luck, a little bit of luck,
How have you evaded me?
I look for you, luck, in every corner
And I can't find you, luck.

I lie down to sleep a little bit
I lay my hands under my head.
My life, my years, they're played out
And I can't get them back