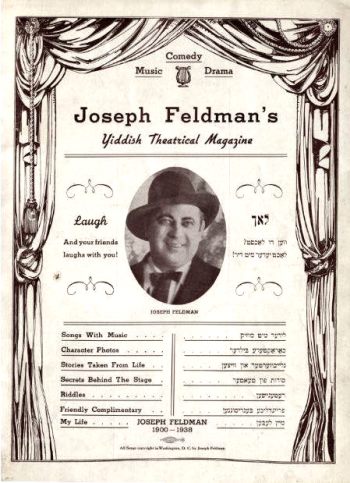 In 2014 I posted a folk song called Dos Fleshele (Chort voz'mi) which was found in the Itzik Zhelonek collection of Yiddish theater songs beloved in Warsaw between the wars. I transcribed the tune from a cassette made by Itzik Gottesman when Jacob Gorelick sang the song in his living room in the 1980s. Gorelick said the melody was borrowed from the Russian folksong карие глазки (Karie glazki).

Recently Steven Lasky, proprietor of the Museum of the Yiddish Theatre, posted this lovely issue of Joseph Feldman's "Yiddish Theatrical Magazine" on Facebook. It contained lyrics and even a few bits of written music. One of the songs is this one, Chort vozmi.

The tune is very similar to the earlier one, but different enough I suppose that Feldman felt he could copyright it. While the other song's lyrics focus on how rotten it is to be a drunk, this version focuses on how rotten it is that a woman dumps you and forces you to become an alcoholic.

Earlier today the helpful band of Facebook yids (Marek Tuszewicki, Shane Baker, Michael Alpert, Eli Rosen, and Paula Teitelbaum) helped me with the word bridiage: it means vagabond or bum in Russian. Eleanor Reissa said she loved the words and would like to hear the song, so I decided to just jump in and record it. 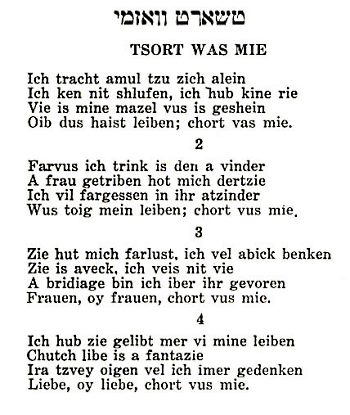 Here are the words as transcribed in Feldman's magazine. Once again I want you to feast your eyes on the extremely non-standard transliteration. I would not have ever guessed a spelling like TSORT WAS MIE and as I've said many times before, if you can't guess the spelling you can't find it.

Words and translation after the jump.

Sometimes I think to myself. I can't sleep, I can't rest:
Where is my luck? What happened? If this is living, the hell with it!

Is it a wonder that I drink? A woman drove me to it.
I want to forget her now. What good is my life? The hell with it!

She left me. I'll pine forever. She's gone, I don't know where.
I've become a vagabond because of her. Women, oy women! To hell with me!

I loved her more than my life, though love is a fantasy.
I will always remember her two eyes. Love, oy love, the hell with it!