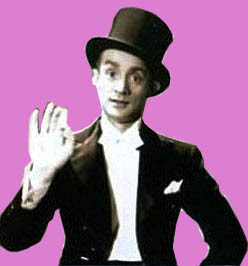 Leo Fuchs was a physical comic and an amazing dancer. He was one of the youngest of the really gifted Yiddish theater actors and so had the opportunity to make movies.

A reader of this blog wrote me and asked if I could provide the sheet music for this song, which is variously transliterated Men Darf Machen A Leben, Men Darf Majen A Leiben, and M'darf makhn a laybn.

I suggested he get in touch with the fine Yiddish singer Yanky Lemmer (whom he had heard performing the song) and Yanky generously provided the Yiddish lyrics. So I did make the sheet music, write me if you want it.

Here is the song as Leo Fuchs sang it back in the day, with a sing-along Yiddish transliteration and my translation in the captions / subtitles:

"Me darf" can also be translated as "one ought to," "One needs to," "Everybody needs to," etc.

I like this idea in the second verse: Leo Fuchs does not caper and play the fool because he wants to. He does it because everybody has to make a living.

Words after the jump.

When I go out in the street, at night or in the morning, I hear people quarrelling.
They argue endlessly. Socialists, communists, they're always fighting. Want to know why?

I thank you, my dear friends, from my heart. I'm happy you're hearing me out.
You think I'm crazy because of the tricks I play.
What do you think, that I want to act all crazy for you? But...