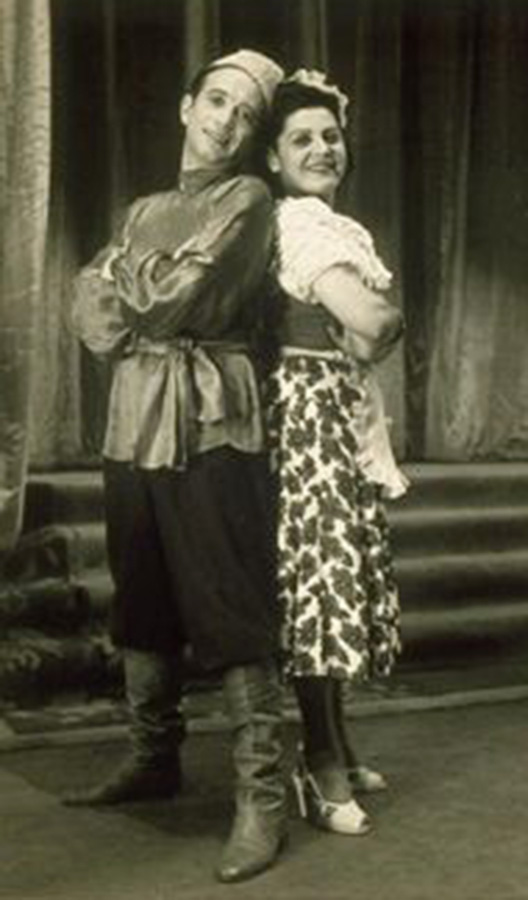 ... and one of the songs he plays is this lovely waltz, called variously Dus Redele dreyt zikh, Dos redele dreht sich, Es Dreit Sich, S'reydele dreyt sikh, etc. It was written by Isidore Lillian in 1924. You can hear it, sung by Pinie Goldstein, on youtube: Es dreit sich.

I don't know anything about Pinie except that he was born in 1905, died in 1980, and lived in Argentina. I'd welcome more information. His long time partner was Ana Rappel. (Anna Rappel). Their music was reissued on Tikva on an album with the unforgivably incorrect title Lebenik un Yiddish.

This is a cool song, it should be revived. If you want to sing it, contact me for sheet music. The image of the wheel of fortune recurs in many Yiddish folk and theater songs. They also say money (and good fortune) is "kaykldik" - it rolls towards you one day and away from you the next.

I see that Betty Kenig (one of my favorite singers of the interwar period) recorded this song way back when and perhaps wrote it. The Medem Bibliotheque in Paris has a copy. Her verses are different and the tune is a bit different but not very. Dus redele dreyt zikh. The flip side of the 78 is Es tiochket which was one of Itzik Zhelonek songs (link is to discussion and recording).

I know an incredibly rich man, he has such a pile of dough
He doesn't live, he doesn't die, he doesn't walk, he doesn't stand,
He thinks he's got the whole world
But the day will come when he has misfortune
And the wheel will begin to turn
What good is a life like this, just taking, no giving,
That's why I sing this chorus to him:

One runs and rushes, pushes and hits,
It's a crazy world
Take my neighbor Tsipe, a real harridan,
But she has, woe is me, a lot of money.
She has ambitions, she makes propositions
To stay with me, just me, alone,
She starts telling me she doesn't lack money,
And I sing her this chorus...

and I just ended up here on your blog because I was listening to Yiddish Pour Tous and they were playing a Pinie Goldsten and Ana Rappel skit Der Hickevate Chusn! I couldn't find much info about these two either but thanks for this great blog.