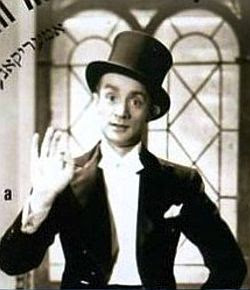 I was asked to provide the sheet music for this song, which you can hear at youtube (click the picture to see the video).

The composer is Latvian-born Oscar Strock, 1893-1975, known as "King of the Tango" (I hope he did not crown himself). He has a good page on German Wikipedia.

The song we're discussing, from the 1940 film American Matchmaker (Amerikaner Shadkhn) starring Leo Fuchs (see picture), is now known mainly for "confronting sexual boundaries" (see Jonathan Friedman's Rainbow Jews). Fuchs makes matches for everybody but not for himself, and this song famously hints at his sorrows.

This was one of three times Strok used this melody. First came the tango, famous in Russia, called "Blue Eyes" (Голубые глаза); you can hear that one on youtube also: Golubyie glaza.

The melody was also used for his famous ghetto tango "Where Shall I Go?" - listen to it, Vu ahin zol ikh geyn sung by Menashe Oppenheim - the Yiddish words were written by Igor S. Korntayer.

In Amerikaner Shadkhn, only the chorus is used, and it's somewhat adapted. I don't know who the lyricist was, perhaps Fuchs himself. If you want the sheet music I can send it to you.

Here are the words in Yiddish and English:

I'm not angry at you, at the sad joke.
It's destined to be this way, I don't deserve you.
Some of the time when I think about it, a foolish tear falls.
It will pass, you'll see, I'm not mad at you
I understand, now, I see, now,
It's a sad joke.