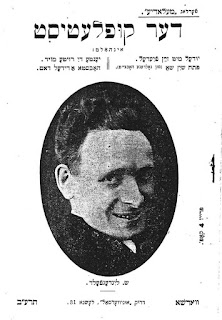 Turns out Stanford University has a copy of an 8-page pamphlet of song lyrics by Shlomo Lindenfeld, published in Warsaw in 1912. He was one of the biggest contributors of songs to Zhelonek's collection but I've never heard his voice. Stanford was going to charge me $95 to make these eight pages, but I knew a guy, so he went and did it for me. (Click for larger view of the cover.)

I've started collecting information for a new project of Yiddish theater songs and popular songs from New York 1895-1925 and am posting what I find at Yiddish Penny Songs (information and recordings both). The song I'm discussing today, Yidl mit zayn fidl, straddles both projects: from the way the words of the chorus scan, it's clearly set to the same (or to a very similar) tune used by Polish Jewish composer Julian Tuvim when he wrote the Polish language song Stara piosenka (Old Song). Also, the plot of Tuvim's version seems derived from the first verse of the Yiddish Yudl mit zayn fidel version published in Lindenfeld's booklet.

(To be clear, this song in all its forms predates the Yidl mitn fidl familiar to so many from Molly Picon's movie.)

Now before Lindenfeld came on the scene in Poland, this same lyric published in his book was published in New York and I discuss it here, with text, translation, and mp3s: Yidl mit zayn fidl ...

... and on the earlier broadside the attribution is "by F. Zinger." This person has been identified for me as Vaudeville and Yiddish theater personage Fishel Zinger (or Fishel Singer or Philip Singer). In Zilberzweig it is stated that he is indeed the writer of Yidl mit zayn fidl, "from an English text and motif." This mysterious Fishl Zinger is also credited as author of the song Tsum Tayvl.


Here is the sheet from Shlomo Lindenfeld's booklet Der kupletist from 1912 (click it for a larger view): 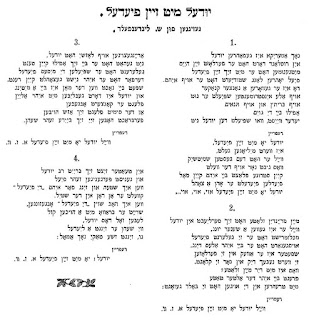 nice work, but as far as i know first time "yiddle" was sang by Pepi Littmann about 1909

A commenter on the other blog post about this song identified F. Zinger as Fishel Zinger (aka Fishel Singer or Philip Singer). In Zilberzweig's Leksikon it is stated that Zinger did write Yidl mit zayn fidl and that it was sung in several languages AND that it stemmed originally from an English text and motif.

i know this "commenter" too many years :)

the "problem" is very simple: Berlin wrote his "yiddle, on your fiddle play some ragtime" in 1909. and this song immediately became a great hit. but i haven't information about the date, when Singer's "yiddle" was born.

so, i'm sure that "yiddle discussed" (in yiddish) is Singer song. but who create this "name" : yiddle mitn fiddle ?

forgot to reuse next : "it stemmed originally from an English text and motif"

Dear anonymous: I have looked at Yiddle on your fiddle... and this is my conclusion: The only relation between the two songs is the Yidl/fidl rhyme, which was ubiquitous. I believe Zinger's song came out in 1909 also. Berlin's song has snatches of famous klezmer songs but does not have the distinctive melody shared by Zinger's song and the Tuwim "stara piosenka" and the earlier 'fidl dem altn lidl."

"ubiquitous"? oy, vey! this is a "real point". you can name, please, at least one work in any language in which this rhyme (or name "yiddle with his fiddle") was used before Irving Berlin?
ps
you agree that there is no place for Julian Tuwim in this "picture"? :)

It's been suggested to me that the yidl/fidl rhyme exists in Goldfaden's Sambatiyon but as I can't find a copy of it I can't confirm that. It's a problem that the early songsheets and 78s are not dated. And for Tuwim, my interest in his song now is that it shares the chorus melody with this 1909 song. I believe Fishel Zinger was quoting it too, but from where?

> It's been suggested to me that the yidl/fidl rhyme exists in Goldfaden's Sambatiyon but as I can't find a copy of it I can't confirm that.

maybe. why not? but, sorry, it does not matter, because this rhyme was not accepted among jews. please, take a look on "zen briders". original klezmers names was Arye, Tevye, Berl, even Shmerl, but as far as i know never (before 1909) Yidl.

> And for Tuwim, my interest in his song now is that it shares the chorus melody with this 1909 song.

> I believe Fishel Zinger was quoting it too, but from where?

i have no idea, but i believe that "the day will come" :)

well. next is the direct link to this rare label
http://russian-records.com/details.php?image_id=2444

there is no evidence that
1. it's Goldfaden's operetta
2. it's original song's title

ps
i know (and, sure, you know too) how many tricks jews invents zu machn a lebn

I will try to find Sambation (Sambatien Sambatyon Sambatiyon) and see if there are clues. I have enjoyed your comments and hope you come again. Do you have to be anonymous? Who are you? Where are you? A grus fun NC

> Do you have to be anonymous? Who are you? Where are you?

what it means? North Carolina? i ask, because for me it always numerical control...

The page cited by Anonymous 9:36 says of Goldfaden's "Sambatiyon" - "Written before 1889. The actors Fishkind and Vaysman remember the piece. The text is missing." Thanks for finding this. The mystery remains.

sometime around 1910 somewhere Lindenfeld had recorded this song

btw
is Fishel (Philip) Kanapoff equal to Hyman (Heinrich) Kanapoff?
or they are relatives?
seriously :)
it's not a joke

I didn't think Lindenfeld was recording in 1910. It would be more likely that he recorded the song closer to the time he published the lyrics (ie around 1926). About the Kanapoffs, I don't know. They are both obscure. Thanks for caring!

but the archive wants something like 150$ for mp3 file. i think that this is too much

btw
Lindenfeld and Faynstein made a LOT of records in early 1910. most, i think, on Favorite Records. you can ask Mike...