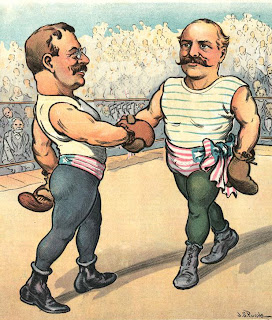 We had fun discussing this song in my Yiddish class. Shtek arayn (shtekt arayn for plural or formal) literally means "stick it in" and so we all jumped to the obvious conclusion before reading the song's lyrics.

However, turns out it means more like "stick out your hand for a handshake" though in the second verse Sheva opined that perhaps Itzik's friend is suggesting the husband, had he tried a little harder, might not have lost his wife, and perhaps he should be exerting himself currently in order to turn things around.

You can hear Pesach Burstein singing "Shtek arein" - that's how he spelled it - at the Florida Atlantic University Archive. (Click the link to go to the page where you can here Burstein singing the song.)

Here's the version I recorded this afternoon, just me and the electric piano, though the song is crying out for full klezmer band treatment. If you want to sing it yourself, I wrote out the sheet music for you:

My translation after the break.


Sholem aleichem is the greeting given after a long absence. Frayer is a really great word: patsy, chump, nincompoop...


Who doesn't know the whole world's custom
To always give the hand, because it doesn't cost a cent
Right away people are ready to tell you "have a safe journey"
And when you return, this is what you'll hear:

Give it here, don't be a chump. Give it here, it doesn't cost anything.
Everywhere, wherever the road takes you, be ready to give your hand.
"Greetings, brothers, put 'er there." (second time: put out your paw)

My cousin Itzik has a really pretty wife.
His friend comes into the house, something unfortunate happens (let it not happen to us):
She runs away with the guy! And Itzik, depressed, doesn't know how...
His friend meets up with him in the street and says jokingly:

I went to the theater with my wife the other night.
A pretty woman walked by, she flirted, she laughed near me.
She says just a word, already my wife is grumbling,
She looks down her nose at me and asks: what's going on?

I say: come on, don't be a chump. Come on, it doesn't cost anything
Don't blow a gasket, there's no point, because she wants to get to know you
Greetings! Stick out your paw!