Lena from Palesteena (not a Yiddish song) 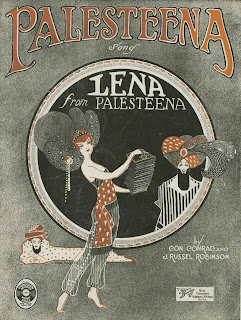 I wouldn't ordinarily post a novelty song in English but Professor Shalom Goldman asked me to sing this at his book talk next Tuesday and since I was having to look it up anyway I thought I would share it with you. Even if only for the magnificent sheet music cover!

Written in 1920 by Con Conrad and J. Russell Robinson of the Original Dixieland Jazz Band, "Palesteena" (sometimes "Lina from Palestina") is a hoary chestnut of the klezmer band repertoire, probably because the bands are desperate for songs in English.