Tsimblen, tsimblen - a lost Zhelonek song found (kind of) and a Yiddish wedding song of an entirely unexpected kind

I look at eBay every day hoping to find my still-lost songs and recently I saw this record, Zimblen, offered at a starting bid of $120. Even though I'm obsessed I couldn't see spending that much, considering especially that it might be the wrong song. The music seems to be by Tanzman and Hyman Corenfeld is the singer. 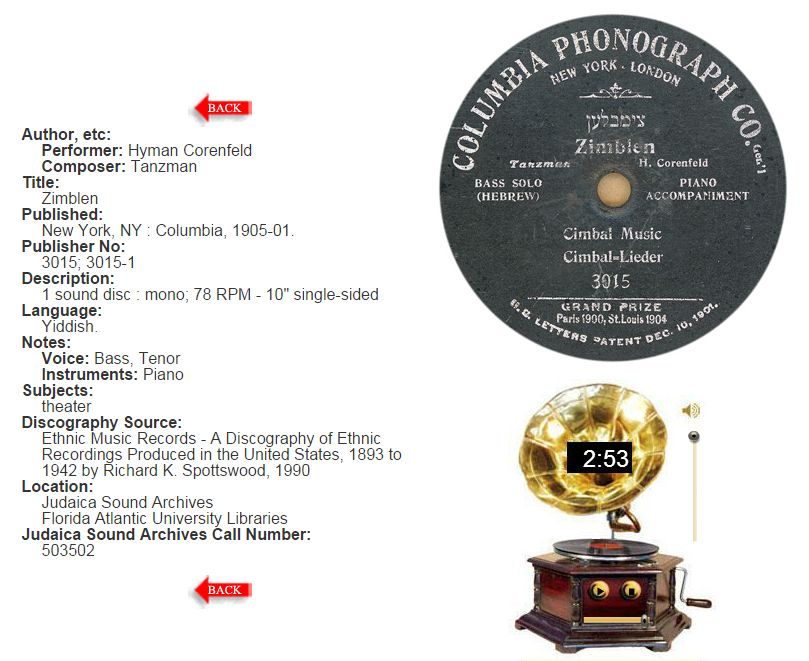 I wrote to discographer Michael Aylward about it and he pointed me to an mp3 of this very record, posted on the FAU website.

I had listened to it years ago and rejected it, but that was before I realized how loosely singers adapted the songs they stole. Listening now I decided this was indeed the song, if you could call it that. Click the picture to have a listen: it alternates lines of text punctuated by improvised piano riffs, then there are paragraphs of monologue, then the chorus which does match what Zhelonek wrote.

For consolidation, here is the earlier post on this song:

Though I'd originally doubted this song was ever recorded, I found it listed as a couplet (under the name Cymblen) recorded by Isaak Feld on Syrena Grand Records.

It's a rambling monologue and in the version Zhelonek printed, it morphs into an advertisement for Feld's own recordings and then for Itzik Zhelonek's own record store!

Most songs that go "tsimblen tsimblen" are wedding songs: the tsimbl is a klezmer instrument, a hammered dulcimer, also known as a cimbalom, usually played at weddings. In this song, however, to tsimbl is to strike or hit, the way cimbalists hit the strings with little hammers.

The leviathan is a giant fish which will supposedly be landed by God and fed to the righteous. The bridegroom in the first verse is the giant fish landed by this narrator - or so it seems at first.

Malach Doyme is Yiddish for Dumah, the angel of silence, the angel who receives the dead at the gates of the 'next world.'

My friend Lawrence Feinberg, Professor Emeritus from UNC, helped me with the Slavic words. His comments are in red.

(sung)
I'm plagued and tormented
My whole life laid waste
I found the leviathan, a bridegroom for my daughter,
And a wedding played out.


zest mir krepos: The young man’s speech seems a mishmash of Russian/Belarusian and Yiddish (the way Litvak Yiddish sounded to Polish Jews?). In modern Russian/Belarusian крепость usually means ‘fortress’; an older meaning is ‘strength’ (cf. креп-кий). So maybe: “You see in me the strength to be a free man” (абы in dialectal Russian is a conjunction like чтобы 'in order to’).
"Thus - first you got married, now you want to be a free man? Just tell us, you Litvak, don't you know that when you take a wife you live with her to the age of 120? And if you have a mother-in-law she'll torture you for a thousand years.


Oyb du hast a shviger darfstu krigen anodrochenye (= an odrochenye; Pol. odroczenie ‘postponement’). If you have a mother-in-law, you should get a postponement. Heyst es, wait till the old lady kicks off.
And the young people who don't want to get married,

II
(sung)
Ladies, coquettes, blondes, brunettes, women who constantly travel to the warm baths, what will become of them?

(prose)
Just such a woman comes to the 'next world' after 120 years, to the Angel Dumah. "What gives, Mr. Passing Over?"


pan mnye proshil = Pol. pan mnie prosił? ‘Did you ask for me?’ She talks to him in Polish (he's an official!).
"Yes, dear lady, I called you; people have been saying things about you, not nice things at all. It's said you told your husband you needed to go to the warm baths three times a year - mud baths, sour cream baths, you need to be elegantly slender, you must lose weight, but [perhaps an aside to the audience follows] as it turns out when she came back her husband saw that instead of losing weight she's taken on, no evil eye, a [I'm wondering if instead of losing weight she's come home pregnant?]


hobn zi gor af zikh genumen keyn eyn hore a tso to pana titshi. It does sound like she came back pregnant. The angel’s speech ends at keyn eyn hore, and the woman’s response is: a tso to pana titshi? (= Pol. a co to pana tyczy? ‘And what business is that of yours?’), with tso ‘what’ repeated at the end as vos. The angel then punningly replies: A vos mikh titshet … ‘What spurs/urges me on [is getting you to lie down on a salting board, where I can flagellate you].’
And so, dear woman, you're going to be laid across the salt-board and the Angel of Passing over will take and shake out over you a little whip with silken flails and lift up your little dress and and will say to you, "Such a woman as you are,

The shul on Tlomatske has very gallant sextons, any one of them will break your bones if you speak a word of Yiddish [it's an assimilated, Polish-language shul perhaps?]


khvatske = Pol. chwacke ‘gallant, brave’. Could very well be a Polish-language shul - according to the new Comprehensive Yiddish-English dictionary the word sinagoge denotes a non-Orthodox synagogue).
(prose)
Just such a young man comes to the 'next world' after 120 years. To the Angel Dumah he says "Mr Angel, people have beaten me, they murder me, they hit me like the plagues, I wanted to go into the synagogue on Tlomatske to do something." He says, "What did you want to do?" He says, "I wanted to hear a bit of [Cantor] Sirota, a bit of Kousevitsky." "Oh, so you needed to hear singing did you? You go in the shul but you don't plan to do any praying! Obey me! When one wants to hear songs a young man like you should in his free time go over to 'Itsik Zhelonek' at New Volove in the 'mark fun altvarg' I take this to be a flea market. on Stavki street (ulica Stavki in downtown Warsaw). building number 548 across from the 'old iron' building Is there such a thing as a second-hand hardware store?, there you find all the Jewish records, of cantors and of [secular] artists, new and old, the latest hits, and you should request Feld's records, Reb. Itzik Feld's records --

and the young people who don't want to buy Reb Itzik Feld's records and also his [printed?] songs and monologues at the well-known firm "Itzik Zhelonek" -- which has the best records and the cheapest in all of Warsaw,