Me meynt nit di hagode, nor di kneydlekh (He's only in it for the matzo balls) Yiddish theater song 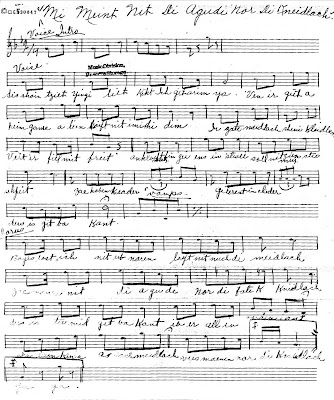 This song is found in Irene Heskes Yiddish American Popular Songs as Meh meynt nit di hagodoh, nur di kneydlakh translated in the index as "Attention is paid, not to the ritual [of Passover festive meal], but to the dumplings [food that is served]" or "People concentrate on the pleasures, but do not think about the responsibilities."

I got the sheet music from the Library of Congress, which has an amazing collection (and an extremely helpful and nice Judaica librarian, Sharon Horowitz.)

It was copyrighted in 1922 by composer Abe Schwartz, who spelled it thus: "Mi Meint Nit Di Agudi Nor Di Kneidlach"

I inveigled Mappamundi's wonderful bass player Jim Baird into playing this with me cold yesterday (neither of us had done it before) before a concert rehearsal. By the time I realized I was holding my paper in front of my head, the rehearsal was over and everybody was gone. Oh well.


So here is our version, click to see and hear it:

Here's my English translation of the Yiddish lyrics:


It's time, young folks, pay careful attention:
When you go home alone, don't start running around
Curvy girls in pretty dresses make you happy
Run from them! Let's hope it isn't too late!

Everybody knows they learned it all in school...

Boys, don't let yourselves be deceived. Don't run after girls!
They're not thinking about the important stuff, they just want the matzoh balls
Everybody everywhere knows this
I myself know a lot of girls who are only in it for the matzoh balls.

Oh, it's pretty, charming, lighthearted and fine
Bride and groom, friends and everybody, coming
To make a garland, dance, the fiddle plays
The bridegroom shouts and everybody puts up the canopy

They learned it all in school, it's well known

The pot is broken, and after the wedding everybody dances happily
The in-laws are having fun, just like a king
Everybody shouts congratulations, all the boys and girls
The groom's not thinking about the important things,
He's thinking about the matzoh balls.