In hundert yor arum: in which some Jews make very inaccurate predictions of the future 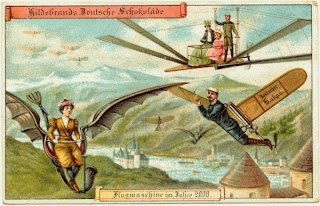 This song is earlier than the Zhelonek repertoire, it was published in 1919. Which, if you come to think about it, is almost 100 years ago so we are supposed to living this peculiar utopia described in the song.

A lot of the illustrations in the video, done in the early 20th century, have the words "In the year 2000" on them. They did a very poor job of guessing how things were going to be fourteen years ago! The curse of prognostication. I discovered this morning when I was making the video that these images are now called "retrofuturistic." Here's the video:

The song originally said that in the future women would be stout and healthy and one would have 30-40 children. I changed this to 13-14, which is sufficiently frightening for me. I love the tune and the chorus is very catchy, it would make an excellent Yiddish sing-along. Here's the sheet music if you want it, with lyrics, melody, chords, etc.:


There's a copy of the lyrics in the Hebrew Union College "Penny Songs" microfilms, but I first found the words to this song at Harvard's Widener library (note that the sheet music on the first page is printed upside down): 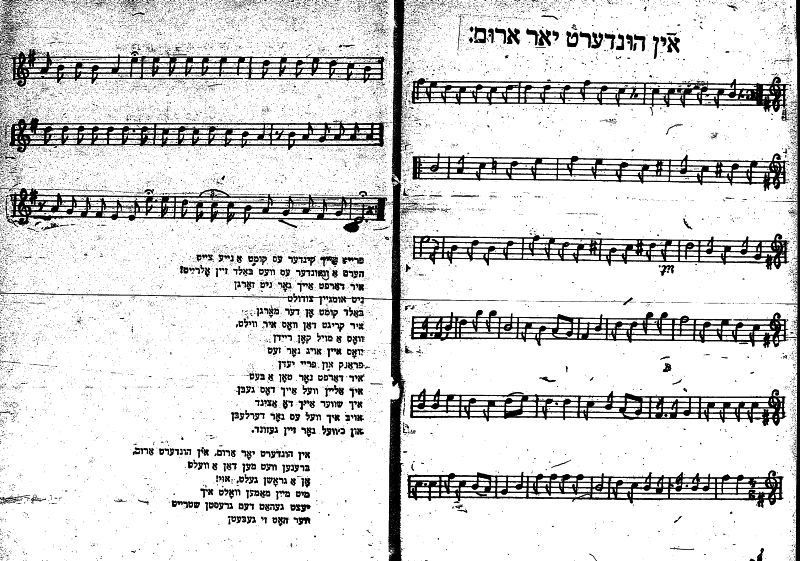 On some recordings there are different verses. I asked Lorin Sklamberg and he wrote:


We have [at YIVO] the original published version from 1919, which I am attaching here - the words differ from what you have below, as you will see. We also have two recordings made in the same year which both feature the first two verses as printed (these are by Louis Birnbaum and Joseph Feldman).

The 1919 words were by David Meyerovitz (Meyerowitz) and the tune supposedly by J. M. Rumshisky (later Rumshinsky). "Song from Tomashefsky's Musical Comedy Upstairs and Downstairs Sung by Sam Kastin."

The third version I have, undated, from the Hebrew Union College "Morris Rund Penny Song Collection," says it was written and reworked by I. Kh. Glezer


On Facebook I asked for translations of brenen vet men dan a velt / on a groshn gelt which literally means "one will burn a world without a penny of money." Here are the generous responses:

Miriam Isaacs: "Live it up."

Mickey Lisieux: "We might be skint but we will have the time of our lives, is the gist of it."

Evidently this song was performed in a Yiddish theater show called "Upstairs, Downstairs" by Sam Kastin. It was supposedly written by David Meyerowitz (original lyrics) and J. M. Rumshisky (later Rumshinsky). I say supposedly because a lot of thieving went on and it's hard to say who is the rightful composer.

Here is my rather loose English translation of the Yiddish:


Rejoice, kids, a new era is coming. Listen, it's a wonder: things are gonna be ok.
You don't need to worry, don't go around in a tizzy. Tomorrow's coming soon! You'll get what you want.
What you talk about, what an eye can see,
It'll be free for everybody if you just ask.
I myself will give it to you, I swear to you here and now
If I can just survive till then with my health intact!

Getting from London to New York will cost only a dime.
You'll just travel home for dinner.
Shabbes after the kugl, if you're bored
You'll grab a couple of wings and jump straight to Berlin
You'll be able to fly to France for a matinee
And then be in Turkey that night for a Salome dance.
Gee! I'd eat up a pleasure like that,
Except I'll already lying teeth up in the ground.

Neighbors won't fight any more
You'll be able to buy 60 eggs for one mark
Wives will be stout and healthy, folks will have 13 or 14 children.
Girls won't need dowries any more because there'll be potential husbands hanging around everywhere.
The circumcision experts won't be needed then
Because baby boys will be born pre-snipped.

People will be singing table songs from Shavuot to Passover
In Vilna folks will be getting apartments for free
Germany and France will live in peace
The mark and the dollar will look the same
Poor people and rich people? There'll be no jealousy.
All corpses will be freed from paying taxes
Eighty year old women will be taken for soldiers
And in Parliament there'll be beds for the sleepy deputies