Also known as A mentsh zolstu nor zayn, this song explains, for those who are self-interested rather than spiritual, why it's still a good idea to be a Democrat and not a Republican.

On the sheet music it's A Mensch Sol Men Sein, aka A Mensch Soll Men Zein, but in recent years Fraidy Katz recorded it as Mit keyn gelt tor men nit shtoltsirn, the first line of the chorus, "One is forbidden to be proud because of having money." Click the picture for a larger version. 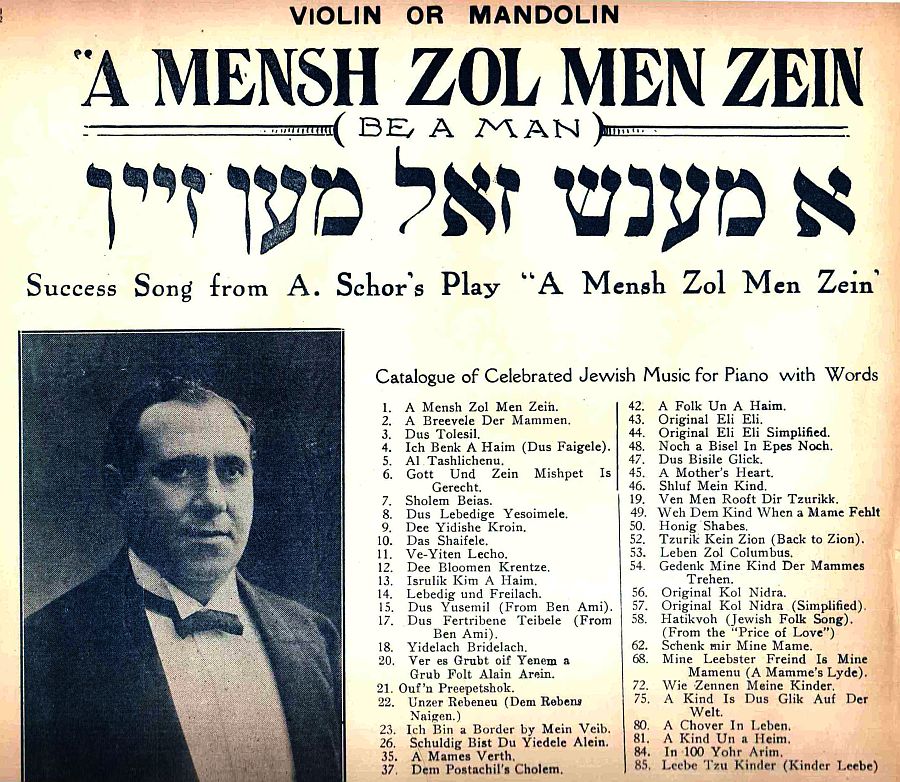 You may also find it as A Mensh Zol Men Zein or A Mentch Zol Men Zain. On the sheet music the title is translated "Be a Man," but actually as most people know a mentsh can be any sex: it refers to a being of sterling character. "Be a Decent Person" would be a better translation.

Jim Baird (bass) and Ken Bloom (guitar) and I squeezed this one in before rehearsal yesterday, none of us had done it before.

I thought I was all set up to have a nice video, but two things went wrong: I turned off the camera by accident after we had rehearsed the song, and somebody who will remain anonymous walked in front of the camera over and over during the song and I didn't even notice! So I patched this video together and it is not in sync, but I wanted you to see the guys.

Our version is pretty close to the sheet music version, which I've transcribed with translation, transliteration, chords, etc.


You think, when you're rich, that you're Master of the Universe
You think nobody's your equal, that nothing but money matters.
You think as soon as you're rich, folks owe you lots of respect.
The arrogant fool doesn't understand: money is round, it rolls away.
Today I have it, tomorrow you have it,
Later, other people have it.

You mustn't be proud that you have money,
It's easy to lose it.
Then you'll suddenly feel the bitterness of being a pauper.
If you want to earn a good name that will endure after your death
Don't brag about your fancy forefathers,
Just be a good person.

Little man, when things are going well and you're incredibly rich
Remember, don't forget the duty you have:
When a poor man comes to your house, don't let him leave with empty pockets
Because you can never predict what's going to happen
Someday it may happen to you, too
Today you're blessed, you're worth a lot, tomorrow it may be the opposite.

I once saw a man as rich as Korekh
He was proud and awful, he persecuted people all the time
Then times changed, the wheel turned
Then you could see that proud rich man begging: "Give me alms!"
Suffering more and more, his death so hard,
He lies buried in strangers' shrouds