Ikh un du a porele (You and I, a Pair) - Yiddish theater song remembered by Masha Roskies

This was the last of the Itzik Zhelonek songs I was able to find, so it some ways it completed the project.. There are twenty songs I have not yet found the melodies for, after three years [update: now five years], so mostly, this is the end.

The finding of this song was quite wonderful. I had an article about my Zhelonek project published in the superlative Yiddish journal Afn shvel - it had to be written in Yiddish, which is not easy for me. The article can be read here: Nokhgeyendik dem shpur fun fargesener yidisher teater-muzik ("Following the Trail of Forgotten Yiddish Theater Music").

When I got my copy of the magazine I pounced on it, because it was all about music in Yiddish. The first article was by Professor David Roskies and in it he described his musical mother, Masha Roskies, who had been friends with many Yiddish theater stars in Poland in her youth and who knew all their music. When David and his sister were young and the family drove each summer from their home in Canada to vacation on Cape Cod, their mother would sing the songs of her youth. In his article he wrote that their favorite song was...

Well, there it was, one of my lost songs right there on the page! I contacted David and he kindly pointed me to a recording of his mother singing the song unaccompanied. Although she was along in years, her voice was strong and she did a bit of scat singing to imitate the orchestral arrangement she had in her head...

My friend Glenn Mehrbach, who is very conversant with musical theater genres, helped me reconstruct the accompaniment. Here is the whole song (not a video):

The song was taken from Nellie Casman's road show Di khasndl (The Little Cantor) in which she cutely wore cantor's clothing (see right) and, obviously, sang this song. It would have been a duet and there was nobody else around when I was recording so I sang a harmony too.

Here are the words as printed in Zhelonek.

Just like a star in heaven you shine just for me
When I sleep and doze, it's only you I want to see
If you cut my heart open, you'd just fine love inside
If you'd just join two hearts and this heart would only feel with you!

You and me, a pair, good years for us
It's my thought that we both will be the same
You'll be my wife, quiet as a dove
When you become a mother, I'll love you until death

Here is the chorus as Masha Roskies sang it:

You and I, a pair, may we have good years
We'll both be happy, we won't know hardship.
I'll be your wife, peaceful as a dove
Until I'm a grandmother, yes,
And we'll love each other until death.


From my previous post about this song, before I found the tune: 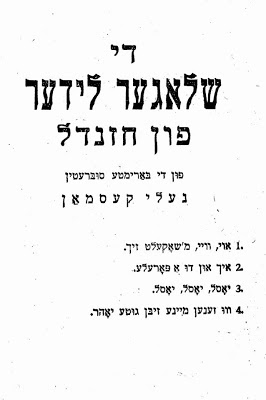 At right, a page from the 1929 book "35 letste teatr lider fun Sambatiyon un Azazel." It says:
The hit songs from Chazndl, from the famous soubrette Nellie Casman:

From Zylbercweig's Leksikon: "Encouraged by playwright Shlomo Steinberg, whom she had married and who wrote special plays for her, [Nellie Casman] went with him in 1929 to Warsaw, where she acted... in Steinberg's play 'A khasndl oyf shabos'...

The manuscript for this play is in the Marwick collection at the Library of Congress but is "text only." Notice all the different ways everything is spelled: