Tankhum: he spent too much time studying and his girl married somebody else. Moshe Koussevitsky sings.

UPDATE: Reposted to include a video of Moshe Koussevitzky singing Tanchum (Tankhum Tanchem Tanchem). He sings pretty much what's in the sheet music, while the "Oberkantor Kuper" version differed significantly. Zhelonek called this a folk song, while Solomon Golub had the song commercially printed saying he wrote the words and music. Did Zhelonek not know that? Was he trying to avoid a copyright problem by lying? Or did Golub borrow a pre-existing song and copyright it?

When pianist Aviva Enoch and I tried this, I almost gave up (and probably should have). It's a song for a man with a classically trained voice to sing. I hope Anthony Russell records it some day. 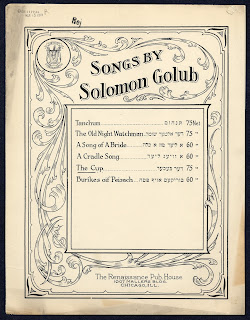 It's one of the few serious songs on Nervez!. The composer, Solomon Golub, thought most Yiddish music at the time was rubbishy and that he would contribute fine art songs to the repertoire. This song was a fixture of Moyshe Koussevitsky's repertoire and I transcribed his singing from a live concert video that used to be on youtube.

Then I found the sheet music at Florida Atlantic University. I've boiled it down to just three pages. Back in the day, Itzik Zhelonek transcribed it from the singing of "Oberkantor Kuper" 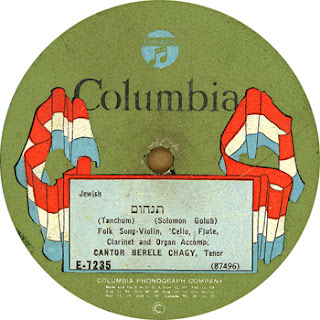 The 'muzik' mentioned in the text, intended to be the sound of klezmer music wafting in through the studyhouse window from the wedding of the young scholar's beloved Dvoyre to another (luckier) boy, seems to be ad-lib. I've included some (not all) of what was on the recording but I imagine it varied from one arrangement to another.

This was a famous encore song for Cantor Yosele Rosenblatt, you can find it on the web as sung by Moishe Oysher and Jan Peerce. Zhelonek's version omits Dvoyre altogether but I've left her in, as that's how Golub wrote it.

Here's what Golub himself wrote to explain this song:

This composition carries us into an old prayer house. By the light of a candle, burning in memory of the departed, two young Talmud students are seated at a table, seemingly buried in their studies of old venerated volumes. In the house next door a wedding ceremony is celebrated and it happens that the bride is the secretly adored idol of one of these students. The sound of the music, floating in through the window, is disturbing his mind, which causes his companion to inquire for the reason of his nervousness. "Don't you hear the music," he replies, "and don't you know what it means? It is Deborah whose wedding they celebrate, and it is I whose hopes are crushed. No sunshine is left for me, nor any consolation for my broken heart." (In order to avoid the Dean's reprimands for neglecting their studies, the two boys disguise their conversation by chanting it after the fashion in which the Talmud is read.) The ever growing despair of the unfortunate lover is set to music by the application of the intonation of "Rabbi Akivah Hojo Oimer."