Nerven, nerven! MY NERVES ARE KILLING ME. Angst in the pre-war Yiddish community.

I made a video for this song:

Or click the album cover to hear and/or buy the song Nervn Nervn on our cd, Nervez! 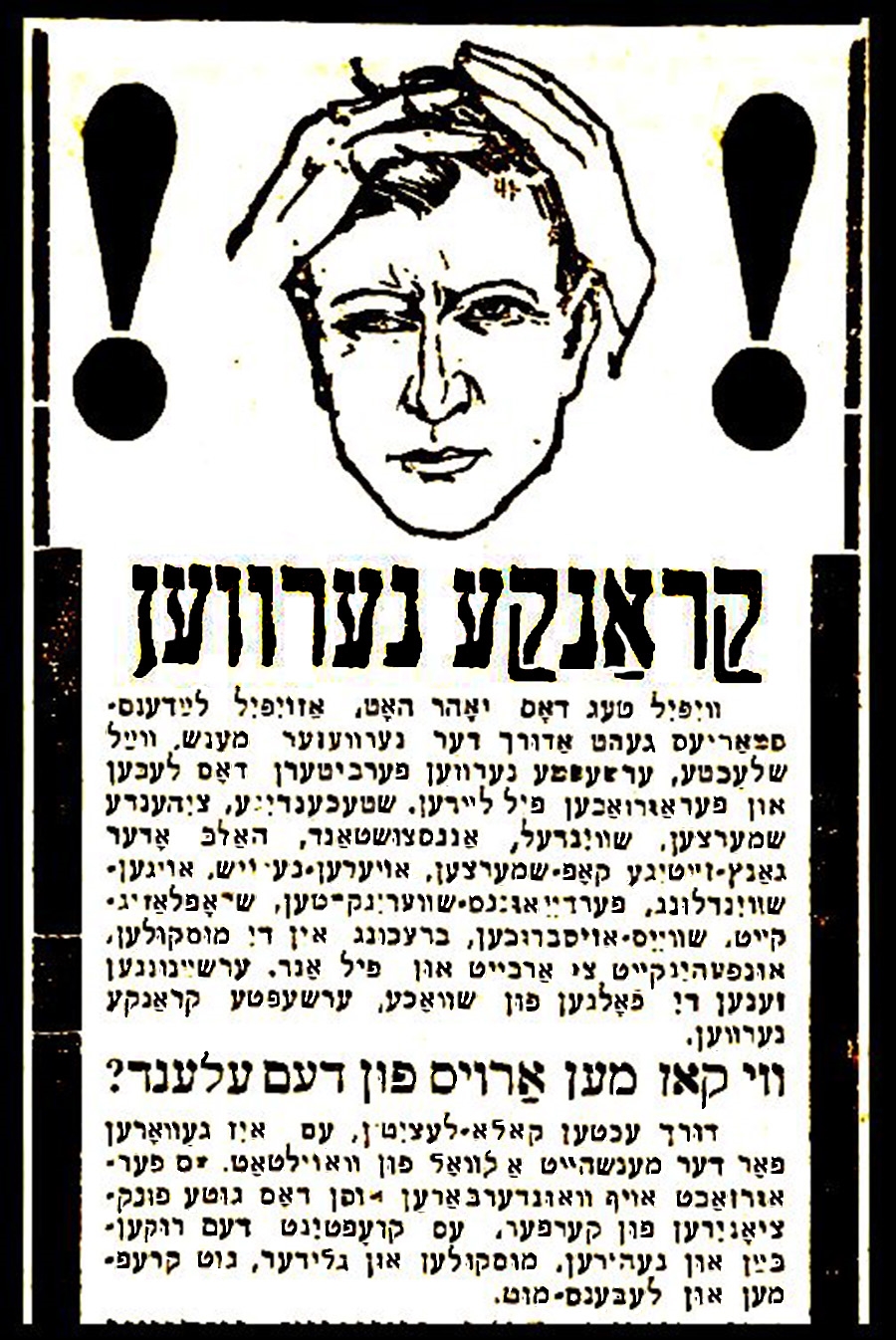 Here's a marvelous advertisement from a 1920s era Polish newspaper. The headlines read "SICK NERVES" and "HOW CAN ONE ESCAPE THE DESOLATION." I'm not sure what kind of remedy this doctor was promoting but you get the idea.

This song, with an intentionally annoying little tune, was copyrighted by Aaron Lebedeff in 1925, and I transcribed it from his submission at the Copyright Office at the Library of Congress. In Zylberzweig's Lexicon, and in Zhelonek's book, the song is attributed to Shlomo Lindenfeld. You can hear Jacob Zanger singing this crazy-making song on the cd called "The Great White Way." Of course, there is a different set of lyrics from each of these coupletists.

The words Randy Kloko sang are his favorite couplets accumulated from the various versions and the translation of what he sang is below. By the way, I know in YIVO standard transliteration these days nerven is actually spelled nervn but Zhelonek spelled it with the ayin and so do I. Big thanks to Roger Lynn Spears, our pianist, for listening to what I wanted ("Charles Ives" came into the description) and doing exactly what needed to be done.


In 1924, in order to end inflation, Grabski the Polish finance minister introduced a new currency (the zloty) which he supported through austerity, US loans and a balanced budget. To balance the budget he raised taxes a lot and the burden fell heavily on the urban merchant class, ie the Jews. If you didn't pay taxes they would come to your house and confiscate your property to pay the debts. The wagon used was called Grabski's agile.


Isn't that cool? The wonderful lyrics are below:

Listen what happened to me,
I’m a guy like any other, but the times oppress me endlessly
As soon as I get up in the morning I go out into the street
My nerves, they never leave me alone,
The conductor on the horse-wagon clanks his bell jing jing jing
I hear the bell from a bicycle, people are running around like the dog-catcher
Suddenly a big streetcar flies by like an arrow from a bow
My eyes start blurring, my head is swimming, ay ay
Suddenly I get sick and weak, my wife takes me to the doctor
He says I'm nervous and takes me to get electroshock treatments

Nerves, nerves, they’re with me here and there
They don’t leave me even one peaceful hour
Oy, it isn’t good, oh the nerves,
they won’t leave me alone!

I can’t sit at home either. I have a wife she’s a misfortune, a
disaster. She begins gnashing her teeth and showers curses
on me all day
If it happens that she quiets down
The neighbor plays his trombone
If it happens that madman should leave off,
A gramophone starts playing
In the courtyard a barrel organ grinder plays
Kids quickly run up
A gypsy begins dancing
Then there’s more noise
Upstairs two choir singers are shrieking
and tearing away with their teeth
Downstairs, further, there are two theater divas
Playing a drama with loud cries
Meanwhile a fire breaks out, people immediately start running
One guy gets his pocket picked, there’s a new outcry

I go into a restaurant, I eat my lunch happily,
Suddenly I hear strange, terrible music out in the street
I run out, leaving my broth, an automobile flies by
It leaves me in a cloud of steam and smoke and I stand there, crazy insane
I become completely irritated, and can't rest the way I'd like to
I take a look in bed, there are a lot of bedbugs
And my nerves start to act up
When I take a walk down Nalevki street,
I hear how the people chatter away
Young people, pale and slender, ask me if I want to change
Suddenly I see what’s going on, all the merchants raise an outcry!
One yells: “The steward is coming!”
And everybody runs after Grabski’s wagon*