Af Bri, a 'Humorous' Yiddish theater song in the style of the shul 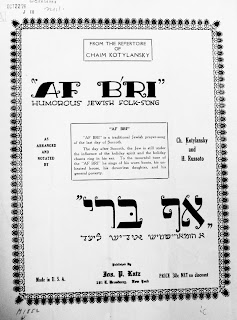 I'm coming to the end of my three-year project. The book Yiddish Theater Songs from Warsaw 1929-1934: The Itzik Zhelonek Collection is out (click for more information and, hopefully, to buy!). The three Zhelonek cds are finished (and ready for you to listen to and, hopefully, buy: In Odess, Lebedik Yankel, and Nervez!

Until some more of my still-lost melodies turn up, my project will be done after I record the few more songs I did not want to put on a cd for various reasons. Like this one: it just seemed a mess to me: the words don't rhyme, they don't fit the sheet music I found in various early folk music collections, there is just something off.

There is a solution in the sheet music in which Af Bri is referred to as "A humorous Jewish folk song arranged and notated by Ch. Kotylansky and H. Russoto." This arrangement has been recorded a number of times by cantors including Mordechai Hershman and Louis Danto. It doesn't sound particularly humorous - it's a slow litany of complaints. It sounds like a prayer, and indeed Zhelonek noted: sing to the tune of Geshem. Geshem is a prayer for rain and Af Bri is the Angel of Rain. It has an extra little bit of melody which makes the verses fit better.

I mapped out the similarities and differences between Zhelonek's text and the sheet music, and came up with a combination which I recorded today. It does not match what is in my book, which stays closer to the folk version and uses only the words found in Zhelonek.

I was able to translate the song except for one word which is transliterated as itas in the sheet music (to rhyme with nas, damp) and which looks like this in Hebrew:
אתת

Google translates it as "signal." Nobody I've asked knows what it refers to.

Hi there Jane. I believe I have the answer to your question on the meaning of אתת!
You see, the audience at which this humorous song was aimed would have been very familiar with the arcane medieval Hebrew poetry of the Geshem prayer, which uses words and phrases not found elsewhere, including "Af-Bri"- the so-called Angel of Rain. It seems that only the author of this piyyut (Eliezer HaKalir) had ever used it. Perhaps he invented it.
Anyway, the first line of the poem goes "Af-Bri UTAT Shem Sar Matar" or "Af-Bri is the name of the Prince / Angel of Rain"
In Polish Yiddish the word would be pronounced "ITAS" (modern Sephardi Hebrew "UTAT"). Not sure what it means but it's part of the name.
Hope that helps clear up the mystery somewhat !