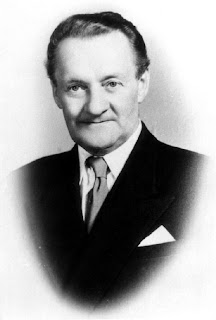 This was one of the last Zhelonek melodies I found: after waiting many months for a collector to digitize his copy of this 78 for me, he finally said it wasn't going to happen, but that he knew of another copy of the record. He pointed me to the Mayrent Institute for Yiddish Culture and Sherry Mayrent kindly shared the song with me. (On the flip side Faliszewski sang Rivkele, the Yiddish version of the tango Rebeka, but I haven't heard that yet.)

Tadeusz Faliszewski (right), born in 1898, had many pseudonyms (Jerzy Nowogródzki, Jerzy Orowski, Jan Pobóg, Jan Saskowski). He was a famous singer in the Polish cabarets and he also directed operettas and revues. With Adam Aston, Henryk Wars and Tadeusz Sas-Jaworski wer, he sang in the Chór Warsa. He is the only singer I've heard recorded in both Polish and Yiddish though there were at least two others (Ola Lilith and Willy Godik) who perform first in Polish-language and later in Yiddish-language venues.

My translation of the Yiddish lyrics:


The person who has a mother is blessed by God
One must really esteem one's mother
In times of greatest happiness or, God forbid, in suffering
One should never be without one's mother
If something hurts you, oy what lamenting and crying,
A mama prays for you*
She doesn't ever sleep at night, she watches over your bed
Let nobody ever be without a mother, no!

* I am amused by the phrase aynraysn kvorim which means "to pray fervently while grasping a tombstone, in order to ward off imminent danger."