Zi hot es! (She's Got It!) by Pesach Burstein 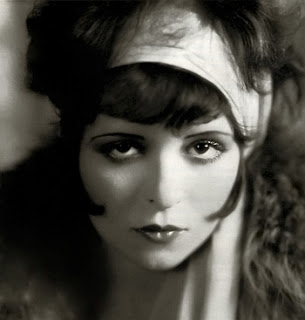 This was a hard one to find: it was hiding under a Spanish name in the Burstein collection at Harvard University's Judaica Collection. Pesach Burstein wrote the words and music, about a true 1920s "It Girl." (Picture: Clara Bow, original holder of the title.)

Itzik Zhelonek noted it as being from the show Gasn Zinger (Street singer) but in his autobiography Burstein said it was in the show Radio Singer. Probably both are true: songs were frequently recycled.

Pesach Burstein had a long and resilient career. In his archive at Harvard you see his handwritten lyrics as he tries to keep his songs relevant and interesting to an audience farther and farther from the place where he began as the "Vilner komiker." He added topical allusions - I saw one version of "Sex Appeal" where he added in "WOMEN'S LIB" - Hah! Imagine that in a Yiddish song. (He was opposed.)
Professor Lawrence Feinberg wrote:

Tsvane is Polish cwana 'sly, crafty' and shamrane is szemrana 'shady'. I wasn't quite sure about brane. Most likely it's a passive participle (Pol. brana) from the imperfective verb brac 'to take', so the sense would be 'she's (often) taken ' i.e. sleeps around."

The song was also recorded by Sem Goldberg on Syrena Grand Records 5462 as Sie hot es but I have not heard it. A (probably different) song by the same name was copyrighted by Gilrod and Wohl in 1923.

Here's the English translation of the Yiddish lyrics:


I know a girl, Serke, she's a sweet bonbon. She's really a blessing from God. She's
got honey-sweet charm, she's got pearl-white teeth, she's got and she's got and
she's got... She has the prettiest eyes in the world, and what she does, you can't
imagine. She's crafty, I tell you - she's easy, that's her trade - she's a bit shady...

Recently I posted a song about "Serke the Bolshevik." Probably not the same person.