Lebedik Freylekh: a klezmer tune which actually has words. Here's the melody and the lyrics. 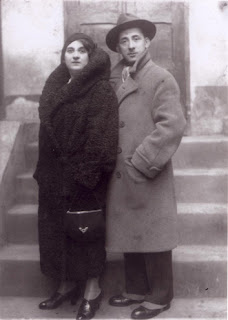 As a klezmer instrumental number, Lebedik un freylekh is an old chestnut. But I didn't know until I started working on the Itzik Zhelonek collection that it has words (I think there are sung versions on youtube now). And I didn't know it was was used as a song in a show In Itzik Zhelonek's booklet he noted: "fun Serke Kozak." Serke Kozseg is a town in Hungary. Serkele Kozak is a play by Louis Freiman, based on his own play Serke der bolshevik which can be found in the Library of Congress.

Zysza Katz (Zisha Katz, Zisha Kats) (at right) starred in the show and recorded this as Lebendig un frohlich, Syrena Grand Record 5352 21918. He was a member of Warsaw's Di Yidishe Bande. In the summer of 1939, he traveled to New York with his troupe for an extended run of performances, but hearing that war was coming, he went back to Poland with his wife Topsha and his children Boaz and Yaakov and Chana, his daughter-in-law.

Here's the English translation:
Lively, happy, royally, let's make a pretty dance together
Everybody together lift your hands, stamp your feet
You in-laws you're all fine aristocrats
Let's dance together in one circle, come here,
It will be a fine dance, all of us together will revel and dance