Zog es mir nokh a mol (Say it to me again): the whole song 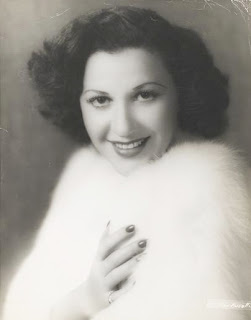 Steven Lasky recently featured Miriam Kressyn at his Museum of Family History. She originally wanted to be a lawyer but was inexorably drawn into the world of Yiddish theater and had a long career.

I found articles about her in the Warsaw press when she came to the city with her first husband, Hymie Jacobson, and their hit show 'Zog es mir nokh a mol." (Say it to me again.)

I found the sheet music (I can't remember where) for the song, under the title "Sug es mir noch a mul," with lyrics by Jacob Jacobs and music by Abe Ellstein. My band Mappamundi performed it only once, in our first Cabaret Warsaw concert. Here's the live video:

I have the sheet music with transliteration and translation if you want it:

The chorus of the song (without the long intro verse) has been recorded many times, probably most famously by the Barry Sisters as "Zug Es Meir Noch Amool"

You can hear the whole song, performed by Bruce Adler, and with English subtitles, here:

Ellstein and Israel Rosenberg’s operetta Der berditchever khosn (The Bridegroom from Berditchev), starring Zina Goldstein and Ludwig Satz, opened in 1931 in New York and was toured in Warsaw by Miriam Kressyn and Hymie Jacobson in 1934.

Avremele, a yeshiva student, gets a free meal each week at the home of a wealthy Jew whose children have received secular education in Paris. Avremele falls for the daughter as does a rich kid from her own circle (Boris).

During a party Reizele's friends tease poor Avremele by staging a fake wedding as a joke. Her father comes in just as the mock ritual is completed and tells his daughter she's now legally married according to Jewish law and must get a formal divorce. But Avremele says no! He flees to Italy and studies painting. The father secures an annulment and when Avremele returns (now a famous painter) Reizele's going to marry Boris. Of course, Avremele (now that he wears nice clothes) gets the nod. "Zog" is the song during which the successful wooing occurs.