UPDATED to include a link to the Olga Mieleszczuk I just found on youtube: Heyliker mame.

And here is my singalong video (with the transliterated Yiddish text and translation): 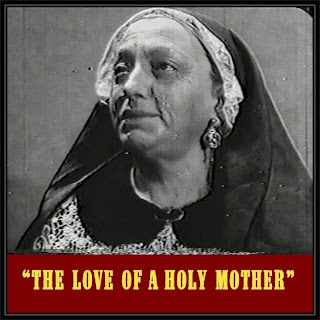 Or click on the long-suffering mother (right) to listen to and/or buy this track from our Lebedik Yankel cd.

In Itzik Zhelonek's collection he references this song as being from BenZion Witler's show "Bandit Gentleman" - I couldn't find the recording by Benzion Witler until I wrote to Karsten Troyke, who has recorded the song as "Ver ken di libe," and he kindly pointed me to the Witler 78 - it's hiding on Youtube under the name Der ken di libeh.

Since I hadn't been able to find that version, I had already transcribed the song from a Herman Fenigstein recording found at europeana.eu - and here's our version of the song and the sheet music with translation, transcription, chords, etc:

Here's our Yiddish music video with captions from a 2013 concert:

Troyke's version is faster and has the authentic rhythm from the Witler recording. Ours is more like the slower Fenigstein version. It's a great song either way. Note bene, the song has also been found under these transliterations: Ver ken du liebe and Wer, ken du liebe.
Lyrics and translation after the jump:

A rainy night, alone. His face fainting, the night dark. Bitter eyes, body trembling with cold. The lips bitten, the shoes torn. Oppressed. The wind has driven away any remaining trace of the orphan's dead home but a memory. His mother -- lost! His rage is hard to comprehend. Instead of mother, there's a grave, a tombstone!

Who can understand the love of a holy mother? Her face smiles though deep in her heart is a bitter lament. She raises her child well so he'll be a good person. She doesn't sleep at night, she's exhausted, she only worries for her child.

No food for three days, long forgotten by everyone. Wind constantly tears at the dirty clothes as he goes. No home to sleep in, no aspirations, no hope. The wind takes ceaseless revenge on the orphan's soul. The eyes dream of home, a mother who presses her child to her heart in warm comfort. The mother lost! Alone in desolation and grief the orphan murmurs quietly a song between his teeth.

Who can understand the love of a holy mother? So goodhearted but deep in her heart is a bitter lament. A mother's goal: she struggles and wants to protect you from hardship. She is swiftly and pitilessly torn away, too young, from her child - by Death.