Ola Lilith part two: she comes to America and makes a hit with the song "Varshe" 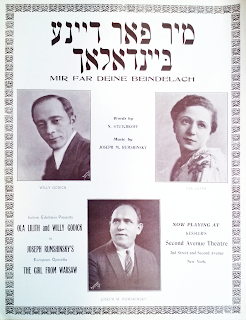 [Continued from part one] Naturally after reading those reviews I was very curious about the song "Varshe." I can't remember how I got my hands on the sheet music. When I did, though, I was sort of perplexed. The verse and first chorus comprise a rather generic encomium. In the second chorus we are in the world of a Warsaw streetwalker, sick of her dreary, cynical life. Huh?

I was so curious I spent a lot of money to get a copy of the script of "Dos Meydl fun Varshe" and I would have published a translation except it's missing one very crucial page. It's like this: Ola played "Lola," a girl from a well-to-do assimilated Jewish family in Warsaw [this was Ola's own background - she did not learn Yiddish until she wanted to be a performer on the Yiddish stage.]

The family is so assimilated, the show opens at their party on Christmas Eve! Her parents are social climbers and are trying to get Lola and her sister to marry these two scumbag Christian guys, a nobleman and a soldier. Unbeknownst to the parents, they are despised not only by both their prospective son-in-laws, but even by their maid and manservant!
To her parents' disgust, Lola has fallen in love with a Jewish comedian. It was "not done" for a nice girl to hang around with actors, much less go on stage herself! The culmination of the first act: she gets thrown out of the family and goes off with her "portner."

In the second act various people she knows sneak into the cabaret to watch her. The two scumbags almost pull off a plot to ruin Lola's father but she and the "zhidovke komediant" get wind of it and foil the dastardly deed.

It's sometime during the second act that the song "Varshe" is reprised, this time as Lola wanders the beloved streets of Warsaw. Having been thrown out of her middle-class family, she now consorts with the lower element and this is why the second chorus is so dark. Unusual for the Yiddish theater in America.

Here's the music video I just made, with English captions:

And you can, as always, get the words, the translation, and the sheet music from me:

Zylberzweig thought Lilith died in the war, but in fact she came back to the U.S., had a radio show on WEVD, joined the US Army when her mother was killed by the Nazis, and as Private Ola Lilith she married Sergeant Leland M. Benton (1921-1970) in Cairo Egypt, September 1 1944. His mother was F. Sallie Benton (b. 1900), his father was William Benton (b. 1897) Her husband died while working for the construction company "Joe Daniels" on October 30, 1970. In her later years she was an irascible, solitary woman. She died in Hialeah December 1890.