Steven Lasky posted a piece on Khantshe in Amerika at his Museum of the Yiddish Theater website and asked for a volunteer to translate the title song. The operetta was published in 1915 in Warsaw, Poland (Theater Library Publishing House Edition).

UPDATE: I have a feature on a different song from this show, too: Ich hob (bay andere gezen).

(I met Steven at YIVO once, we both wanted the same box of research materials! He's been translating an immense amount of the Zilberzweig Lexicon of Yiddish theater.)

Why does WorldCat use such weird transliteration? They have it as Ḥonṭshe in Ameriḳa. The sheet music says Chantshe In America. Note they don't use the Yiddish form of the word, Amerike.

If you want the sheet music I have it:

Pianist Aviva Enoch and I recorded this yesterday: 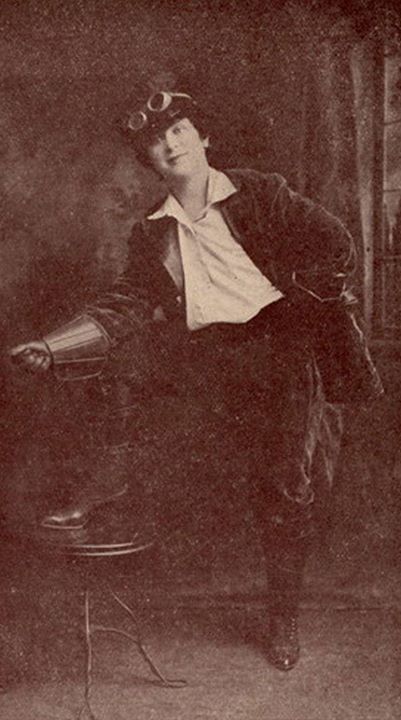 I see that Khantshe (who was played by Bessie Tomashevski and, later, Clara Young) appears to have been a modern girl, a pickpocket and a champion for women's rights. The show was written by Nahum Rakow with music by Joseph Rumshisky and words by Isidore Lillian. Molly Picon also played the roll. Steven Lasky found this picture.

The rest (plus translation of the Yiddish) after the jump

Khantshe used to be a name people laughed at and they made fun of her.
Oy, let it not happen to us!
Khantshe's not the same now, I'm telling you.
It's new times - she's freed from slavery,
Khantshe is completely respectable now.
Everywhere she's big shot
And people shove to get to Khantshe, and woo her
Listen: for her, men have no worth
Khantshe is riding high!

Khantshe is a now quite the lady
Oy, she's audacious, a hero,
Not mocked, plain to say
Lift your hands for Khantshe
Khantshe, she walks like a policeman
Oy, Khantshe, only Khantshe lights up the world

You can't catch Khantshe in a bluff
And she fights for women's rights
That is a plan:
for a woman and her husband to be equal.
Down with trousers and down with the husband
She gives a squeak when she stands and gives a speech
Khantshe is a regular peach
"Girls, women, man up!" cries Khantshe,
Don't be afraid of a beard and moustache.
We, too, have the right
To play all night every night."
Drummer - this isn't bad! [I think this addresses the orchestra as it strikes up the chorus]

Who goes to a picnic, a ball,
Goes to find a 'treat' in the dancing school?
In a car, I swear, who do people give up their seat for?
Who finds in the butcher shop
The butcher's marrow bone?
Under the bridge she buys one fish, hear a trick:
Five pieces are hidden in her apron.

Who can make a watch and chain run? Only Khantshe
In the department store a total thief.
Who is the tops?
Put together from bluffs?
Rets[?], handkerchiefs and puffs?