Back to recording in my pajamas and bedroom slippers...

Gangsters and the underworld were in vogue during the 1930s. Ola Lilith brought a show called "Dos Ganevl (the little thief) to Warsaw around 1929 and this picture is from the 1929 book of hit songs from Azazel and Sambatiyon.

According to Bernard Wasserstein (On the Eve: The Jews of Europe Before the Second World War, p 180-181), this was originally a folk poem by a Vilna pick-pocket. 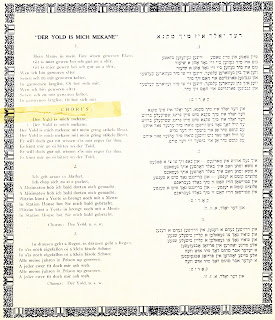 In 1920 Gustav Goldstein and Max Leibowitz published it (as Der Yold Iz Mech Mekone) citing the former as singer and the latter as arranger. Click the picture to see their version.

The song was enthusiastically "folklorized" and many versions can be found. Zhelonek's version was sung by Ola Lilith in the the third Azazel program. Some of the verses I have come from Ganovim lider (Thieves' songs), assembled by Shmuel Lehman, Pinkhus Grubard publisher, 1928, Warsaw. This book can be found at the Robert and Molly Freedman Jewish Sound Archive at the University of Pennsylvania and it endearingly includes definitions for the thieves' argot used in the songs.

I sang six of the many verses available. Here's my translation of them:


The patsy is jealous of me and my skimpy bit of bread. He doesn't want to know that my pockets are torn and I go barefoot in the street.

My mother and father were lowly (or of the underworld, or in a bad way). It was their desire that I become a rabbi. I went to religious school until I was 13, until I was 13 (my butt) squeezed that bench.

So I was sitting, drinking and eating, my mother used to slip me some money My father died, then my mother died, and I was left alone in the world.

I was left an inheritance: a barrel organ. I sold the barrel organ and took to drinking booze, and I was turned into a thief.

I go to the market place, there's a market fair laid out there. I want to make a "transaction." An old biddy comes along and sends a cop after me and they take me to prison.

It's raining outside and there's a bit of snow. I'm sitting out my whole life in prison and all my bones hurt.