For me the ultimate version of this song will always be Michael Alpert's as he sang it on Pearls of Yiddish Song.

Here you can hear Alpert as a young man singing the first verse and a half (there are lots of other peoples' versions as well). 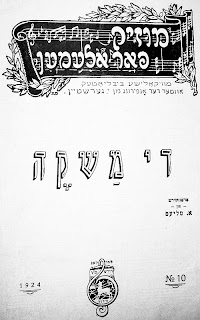 My transcription is from sheet music at YIVO, "From the I. Gershteyn collection; heard from B. Volfson, Homel"

As the Mloteks pointed out in Pearls of Yiddish Song, Mikhl Gordon (1823-1890) wrote this song. He was a member of the Enlightenment and in the song he pokes fun, as many of his peers did, at the copious drinking entwined into chasidic culture of the time. The words were published in 1868; the words and music were published anonymously
in "Ost und West" in 1918. This is the long version, the whole text; the song is usually shortened in performance.


Here's my English translation of the Yiddish:

When the matchmaker came to my grandfather to propose a match, they talked and talked in vain until a glass of whiskey was mixed in. Thanks to whiskey the match was agreed upon, and my father became my mother's bridegroom.

I also remember my circumcision. The table was never without a glass of whiskey. The guests shouted congratulations! The child will grow up to be a rabbi! That's why I drink from a great big glass (rov-kos) - and I drink limitlessly

I remember when they took me to school, they celebrated late into the night. And the rabbi drank from the bottle, and it was from him in school I learned to drink a lot of whiskey

At my bar-mitzvah I gave a speech, that it's not bad at all to take a little whiskey one's own self. The czar is (pardon me) a great drunkard. Therefore, brothers, poor and rich, let's drink, all together.

I remember at the signing of my marriage contract everybody drank like the goyim. And the glass was broken and the whiskey never crept off the table. And I didn't notice I was a bridegroom and was pouring down my throat the whole time.

I remember when I was taken to the khupe. One took a bit of booze. And the rabbi said the blessings, and in the cup there was nothing left at all. And I stood like a fine young man and licked the cup with my tongue.

Soon after the wedding I began fighting with my wife. We went to see a good guy, he gave us an amulet so we could go to a new apartment. And in the new apartment I couldn't hear my wife and all the while I'm gulping it down...

My few years, when I've lived them out, I want to be taken to the grave, a flask of whiskey close by the wall, a big glass in my right hand. When the dead are raised I'll be here again and I'll soon be drinking whiskey, right away.