Click the picture at left to hear (and/or buy) our version of Ikh for aheym with Randy Kloko singing baritone and Aviva Enoch on piano.

And here's a live version with me and Roger Lynn Spears on piano:

Looking for Yiddish songs by title is frustrating, you have to try an awful lot of spellings. I looked for this one in the Copyright Office for a long time but didn't find it until I searched in the "Claimant" section (I think this is where people send notification that they own a song, but they do not send the actual music as proof) under the composer's name - David Meyerovitz. There I found that he claimed this composition in 1926 under the mystifying version (mangled no doubt by Copyright clerks) "Tikh fur a heim" - he didn't renew so it's in the public domain.


You can get Leo Vigoda's version at Amazon under the name "Ich fur aheim" and here's Herman Fenigstein singing it on Youtube under the title "Ich fuhr a heim" - the version I originally transcribed:

Later I found the song with the references to Hatikvah on the Florida Atlantic University Judaica Sound Archives, sung by Peisach Burstein under the name "Ich Fohr Aheim" and this is what we eventually recorded. 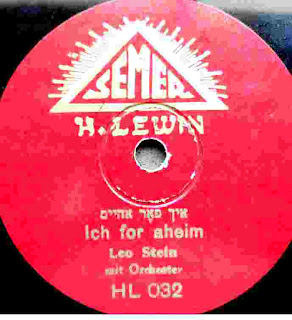 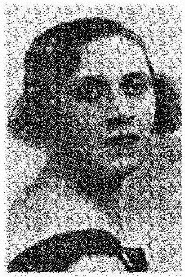 The version of the words printed in Zhelonek differs from Fenigstein's rendition. Zhelonek heard the song from Yekhoved Zilberg, but who appears in Volume 5 of Zalman Zylbercweig's Leksikon fun Yidishn Teater - that's the volume that memorializes performers killed by the Nazis.

She was born in 1900 in Warsaw, sang in the chorus of the "Venus" theater and then began playing small roles, larger roles, and then was a "prima donna" in shows like "The Romanian Wedding" and in Zigmund Turkov's production of "Mekhutonim" (In-laws). It was in 1934 that Zhelonek probably heard her performing in "Di Yidishe Bande" in the Novoshtshi Theater. If only she had, indeed, managed to find her way to Palestine...


Congratulations to you, Jews, be lucky,
I know you'll be happy , listen to this
We've hoped since forever - our happiness is old
The exile is over and I'm going back!
The presence of God settles over me and tears away my anger
I'm going to Palestine the way my grandfather wanted to!

Goodbye, Columbus, I remain faithful to your country
Goodbye, all you troubles, I'm packing, Goodbye!
Forgive me my habit of always being sad
Drink your cream sodas and I'll drink the wine of Mt Carmel
And if you talk about girls, you can take my word
As here, one receives just dresses (girls),
But there, there are wares to sell