Ikh dank dir, Got, az ikh hob es nisht (I thank you God, that I don't have it)

Click to listen to and/or buy our recording of "Ikh hob es nisht" (Randy Kloko is singing the happy-go-lucky pauper who sees miseries around him caused by what one would suppose to be ... good luck).You can find us doing it live on youtube, and here's a version I did without Randy: 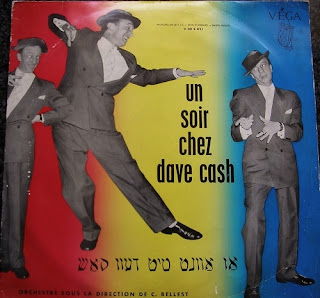 I found this in the Harvard library sung by the fabulous Yiddish comedian Dave Cash. I believe his title was "Ich dank dir Gott as ich hob es nicht" - see what I mean about the spelling?

According to Wikipedia he was born in Romania but he lived in France and he specialized in song parodies. It seems he was recording into the 1960s and 1970s and among his big hits was a Yiddish version of the Toreador song from Carmen. You can hear some of his work at the Dartmouth Jewish Sound Archive, for instance, his "Dave Cash Presente ses Fantaisies Yiddish" album. In 2004 ערב עם דייב קאש (An Evening with Dave Cash) was issued in Israel.

Itzik Zhelonek credits the song to Itzik Feld (Yitskhok, Izaac, Itsik) but I couldn't find that recording. The verses Cash sings are entirely different (though the same idea) from Feld's. Both versions were fun, we did a combination. In Cash's version, the friend wants to borrow 120,000 francs instead of 20 zlotys.


Listen, gentleman, I'm not jealous of the plate-scratcher who has so much money.
What good is money to him, if he can't eat, that great hero.
If I had riches, I know perfectly well, it would soon drive me crazy.
Without money, my head is clear.

People love to scrimp and save, it's a sickness,
they don't eat, they don't sleep, they just drag their money to the bank.
My neighbor was stingy, he saved, hear what happened:
he piled up a huge fortune, the bank went bust.

I thank God I don't have it, if I saved, what a blockhead, it's just good for dead people.

My neighbor had an absolutely gorgeous wife,
when she went around in the street every man looked at her.
Her husband is angry, all he thinks about is that somebody's going to take her away.
Naturally if I had a wife like that I'd also live in terror.

I thank God I don't have her, his wife is really with it, mine is like a dead cow.

Listen, gentlemen, Shlomke is a man who borrows and never gives back.
He asked me to loan him money for just a moment, he begged
me with a sob, I should lend him 20 zlotys.
If I had the money and lent it to him I'd never see it again.

I think you God that I don't have it.
What good would it do me to be philanthropic and afterwards have to go chasing down debts.