Spetsialitetn (Specialties, Areas of Expertise): a Yiddish theater song from Poland which is still lost: 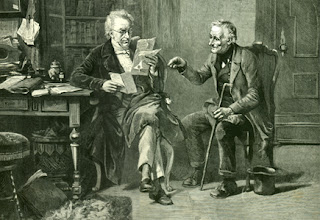 In the index Zhelonek called the song "Spetsialistn" (specialists). Perhaps this song was lost because the last verse was topical - having to do with corruption at the time in the official Jewish governing body in Warsaw. I hope the melody turns up some day because the lyrics have a cynical attitude that would fit right in today. Let me know if you have a lead!

The picture is of (obviously non-Jewish) Polish lawyers of the 19th century.


There are specialists in the world, everybody knows and understands this.
Each person must be good in his own field, otherwise he wouldn't be a specialist.
If somebody comes along from a different field and tells you he understands,
Answer him right off, brothers: "This is not your specialty."

To be a waiter in a restaurant, this isn't bad, you may believe me.
Even though few guests leave a tip.
Even so, he lives quite well because he knows how to stroke his guests.
When it comes to adding up the bill - that is his specialty.

Being a lawyer is a very good thing, it's a very tasty livelihood
You just need to know how to talk a lot and have a top-hat and a frock coat.
He must see to getting rich clients, they'll give him money when he asks for it.
Because how to make a lie out of the truth - that is his specialty

You ask me with a crooked expression, and you can't understand:
What is so dead in the kehillah [Jews who regulate/oversee the community]
Just as if there were nothing going on
You can't have any complaints against them
Because it is they who preside over the cemetery
And as it relates to burying things deep in the ground
That is their specialty

Here's the original Yiddish in transliteration: