UPDATE: Here's an Instagram video extract. I had to speed the song up a little to fit a verse into 60 seconds.

Click the album cover to hear and/or buy the song from our Lebedik Yankel cd, with Randy Kloko singing the guy who just can't get a break no matter how many jobs he tries. (The picture is one of the few I could find of a YOUNG man in a shtetl: I figured the narrator must be relatively young since he isn't "lacking for girls"...) 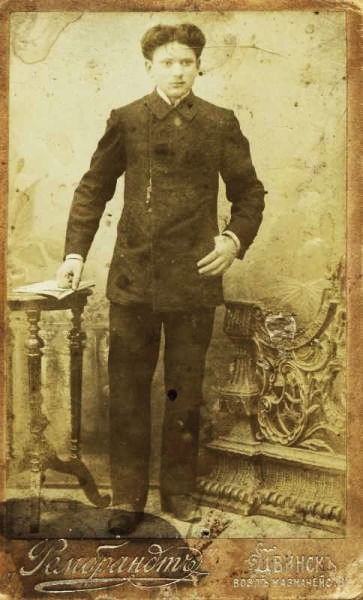 The song was sung in Kalmanovitsh's 1924 show 'Dem tatn's zundele' and Zylbercweig credits Peretz Sandler as lyricist. In the manuscripts of the Hebrew Actors' Union housed at YIVO, "Dem Tatns Zindale" is credited to lyricist Oscar Ostroff and composer Ilia Trilling. However, in the Library of Congress one finds the song copyrighted in 1928 by lyricist Morris Rund and composer Herman Wohl. Morris Rund registered a tremendous number of copyrights of Yiddish theater songs - did he actually write them or were his claims false? How can we ever know?

This song is only hard to find because of the weird ways the title is spelled. For instance, it was copyrighted in 1928 by (lyrics) Morris Rund (melody) Herman Wohl, spelled: "Asach meluches in weinig bruches" ...

Until YIVO created a "standard Yiddish transliteration" there was no system, everybody spelled Yiddish in English differently -  many people still resent the standard system of approximating Yiddish sounds and refuse to use it.

The reason this matters is that search engines can't find references to Yiddish words phonetically, you have to guess what spelling the content generator used.

The song was sung in the show 'Dem tatn's zundele.' Some cite Peretz Sandler as having written the words though Morris Rund cited himself as lyricist in the copyright. Morris Rund has a tremendous number of copyrights of Yiddish theater songs - did he write them or merely claim them falsely? How can we ever know?

I'm blessed with many occupations, everybody knows it,
The problem is I don't have much luck with any of them, it makes my gall burn.
I've been a student, and a sexton in a synagogue,
I've even read from the megillah in a rabbi's house,
I've sold tallisim and tfilin in town
I buried the dead and heated water in the public bath...

I was born a servant, don't think things go well for me,
I don't have any luck. I was also a tfilin scribe and I dealt in hides,
I sold stocking caps to women, but I'm buried in the ground.
I also was a ritual slaughterer, I know the Torah well,
I've been a wedding entertainer
And a matchmaker because I wasn't lacking for girls...