On a heym (without a home) - Benzion Witler from "Yanko Tsigayner" (now with bass and fiddle!)

UPDATE: Here is a live version of the song from a concert at the Carrboro Artscenter:

Or you can click here to listen to and/or buy this track, aka Ohn a heim: On a heym on the cd Lebedik Yankel

Here's an example of  how Yiddish theater stars re-worked material for their own purposes. This song was first published in 1920, a composition by Meyerowitz & Friedsell from a show called Di kraft fun der natur. I got the sheet music from Florida Atlantic University and in it "Farfinstert..." was the first verse, then a chorus, then a second verse which was your typical generic plaint sung by an ill-treated mother. 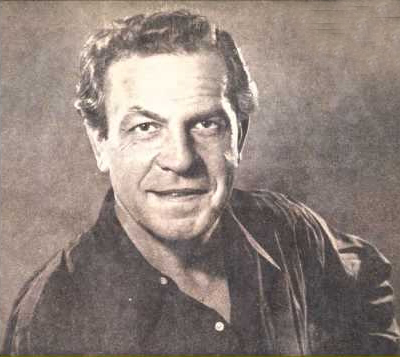 Zhelonek's source was BenZion Witler (right), who used the song in a show called Yanko Tsigayner (Yanko the Gypsy). Witler threw out the mother verse - he started off instead with a half-verse about "us gypsies", then sang the chorus, then sang as a second verse what was originally the first verse.

I published this earlier in July but Randy Kloko drove up from Florida to sing bass on some of the tracks for the new cd Lebedik Yankel and I wanted to show off his part (and a fiddle harmony). We sang the original first verse (Witler's second verse), the chorus, then Witler's half-verse, then another chorus. I have never heard a recording of this song. Aviva Enoch is playing piano.

There is another song from this same Yanko Tsigeiner show in the Zhelonek collection (just called "Yanko") but I haven't found it yet.

My translation from the Yiddish:

The days and nights are dark and empty, I suffer a lot of trouble and pain. Nobody understands how bitter and awful it is when you don't have a home. You feel beaten, a stranger, hated; your own blood makes misfortune for you, you're somebody else's burden. It's easy to kick someone who's down. [They say:] "Don't go here, don't stand here, get out of the way." Woe to the body and head that must beg for a place to lie down. God, hear my lament: how bitter it is to be alone.

Without a home, without a home. This whole life just isn't working out for me. Nobody should be tested this way. This is the greatest, heaviest suffering, one begs for death. No home, empty and woe to them who have no home.

We gypsies, we live fine, we live without worry. What could be finer than to be a gypsy? We live for today and don't think about tomorrow. We gypsies live quite well because the whole world is our home.