UPDATE: Re-posted to add an Instagram 1-minute video of the song:

Or visit Mayn vayb kumt fun Zakopane on the Lebedik Yankel cd to hear the whole thing and maybe even buy it for eighty cents.

Here we have a misogynistic song about a guy who's miserable that his wife is coming back from her vacation in Zakopane, a resort in southern Poland. This was not a new trope, there were loads of existing songs on the subject. See, for instance, Gvald di mantens and Mayn vayb iz in der country, Hurray Hurray!

Zhelonek tells us "sing to the tune of Yoshke fort avek." He printed four parodic verses and a roman numeral V for a fifth verse, but there was no fifth verse.

There are actually quite a few versions of the Yoshke folksong about a man going off to the army (priziv) and leaving his sweetheart behind. There are dozens of verses, too. I chose a few Yoshke verses to add to this recording and I used two of the tunes because they are both so lovely I couldn't choose between them.


This song originated in Vilna, Lithuania, and is about an underworld character, "Yoshke," who preyed upon the small merchants in the Jewish quarter there. When the Russo-Japanese War broke out in 1904 and he was drafted, this satirical-humorous song describing an imaginary conversation between Yoshke and his lady-love became popular. With the passage of time, however, folks began to interpret this song differently, with emphasis on the poignancy of separation in wartime. 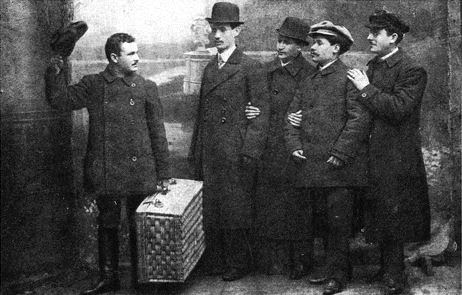 Friends of Moshe Granica accompany him as he was recruited to serve in the Czar's army. He is about to leave town to present himself for duty "somewhere in Russia."