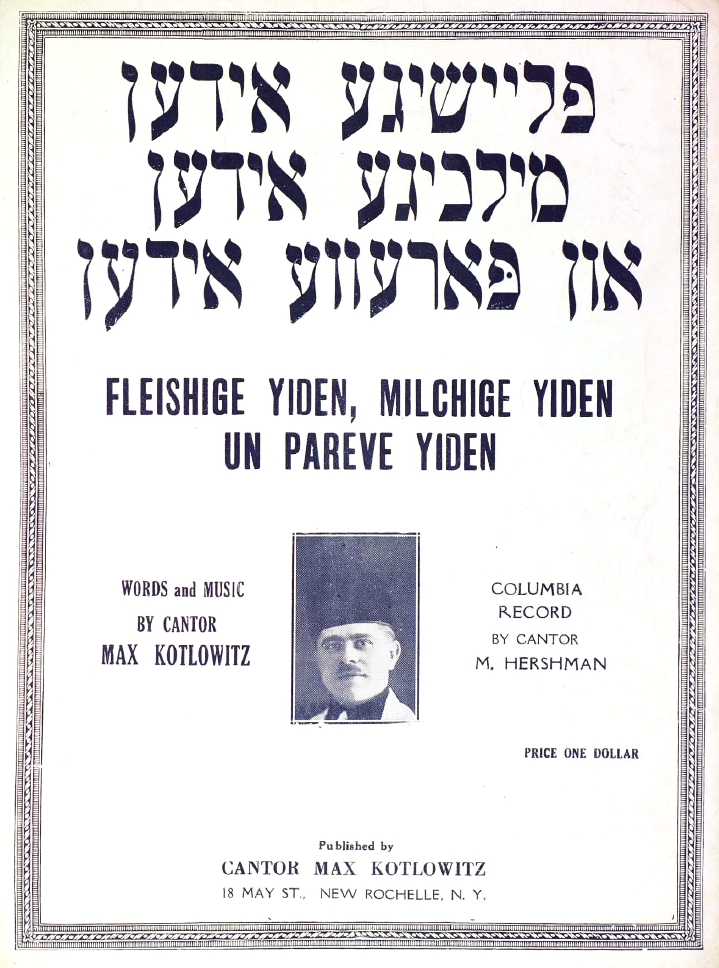 This song appears in the Zhelonek collection under the name "Milkhike un fleyshike yidn" - I got the sheet music for it quite some time ago from Florida Atlantic University (under the name printed on the title page: Fleishige yiden, milchige yiden un pareve yiden). The composer published it himself, out of New Rochelle New York.

I was working on it morosely - because I'm not the right person to sing it - then I discovered today somebody just put a lovely version of it up on youtube yesterday! This is Cantor Moshe Schulhof singing "Fleishigs Yidden Milchige Yidden":

Zhelonek cites the version by Mordechai Hershman, which can be heard at the Dartmouth Jewish Sound Archive under the name "Fleishige Yidden Milchike Yidden."

After composer Kotlowitz heaps scorn on the meat Jews (rich and bossy), the dairy Jews (meek and with low ambition), and the pareve Jews (who run after the esteem of the goyim), he describes, in the fourth verse, the Jews he actually likes. It is all so divisive. And illogical. Neither Herschman nor Schulhof sings the last verse.

The arrangements recorded by Hershcman and Schulhof are adapted very freely from the sheet music. In particular, many bars which are 4/4 bars in the original are truncated into 3/4 bars and the song is much better that way. I've done a streamlined version more like what they sing and that's what you can buy here, along with the entire original text and melody.

Here's my translation from the Yiddish, you can see for yourself:

There are different Jews in the world
One is a Jew, the second - also a Jew, the third is a Jew, sad to say.
There are fleyshik (meat) Jews, there are milkhik (dairy) Jews
There are pareve (neither meat nor dairy) Jews, sorry to say

So, fleyshik Jews, sated Jews, rich Jews, they're happy aristocratic Jews, they have power and they set the rules, they turn the wheel for all of us, that's how they are.

Then there are milkhik Jews, sheeplike Jews, poor Jews, crying Jews, never happy, paupers who are thinking day and night how to become temple employees - these dairy Jews, also Jews.

But there are pareve Jews - they're not fleyshik, they're not milkhik. I mean those Jews who don't wear tfilin and don't go to shul, They just run to the goyim looking for a position. For them everything is good and fine but if it's at all Jewish it isn't going to be in their houses. These pareve Jews - I mean treyf Jews - Woe to this kind of Jew

But the real, dear Jews of today, who believe in God, who used to creep through water and fire for their God, nothing was too much... Real, dear Jews, who receive no honor and no money, God-fearing, torah-loving Jews