UPDATE: Re-posting to include a video of the vintage recording by David Hickopf.

We also recorded it, see Dos talesl on the cd Nervez. 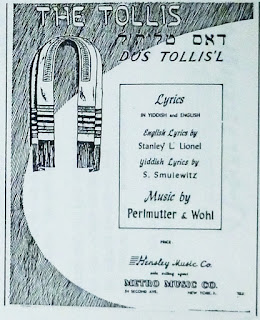 At the Dartmouth Jewish Sound Archive you can hear several versions of this song. I took this from the version by cantor David Hickopf. (Spanish language recordings have him as David Hitzkopf and there is also the combination version Hitckopf.)

Hickopf credits the song to Goldfaden so clearly his version predates the version published (and copyrighted) by Smulewitz, Perlmutter and Wohl. (Theirs is spelled Dus Tolesel.)

Goldfaden was known for lifting songs from the folk tradition and putting his name on them; somebody did indeed originally compose this song but it quite likely wasn't him. On the Mendele listserv the Mloteks noted they had a version of this song published in 1906.

Mariam Nirenberg has an a cappella version of the song; if you listen to hers first and then Hickopf's you see how an arranger puts meters and harmonies on top of a melody which was originally a single sung line.

Here's my translation from the Yiddish:

The tallis is a dear thing that belongs to the Jew.
Everyone has many hopes bound in it and is happy with it.
Oh, dear tallis, heart's consolation, you've listened to a lot of prayers.
Of all the bitter hearts, you well know Jews' pain.
You're always with a Jew, from his bris and after,
And also when they bury him with the little shovel
You wrap him in yourself

Companion in belief, you are my eternity.
The tallis is the Jew's only consolation in his happiness and suffering
From his birth to the grave you are with him
Chased everywhere, his life plagued,
Everything he owns is taken from him
Except the tallis, it isn't taken away

When I was only 13 years old I put on the tallis
How little I understood what is the most dear to me
In my speech I promised to keep my tallis clean
To my sorrow I was plagued by the exile, always in tears and laments
It was drenched with my tears, it never dried out
It also suffered with my troubles - my pain is its pain, it's big

When you were carried with joy to the khupe
The happiest day of your life
In beautiful clothes you were adorned
Also, a talis must be given to you
A new feeling dominates/subdues the young man
When he dons the talis with joy
"Then I am" says the talis, "yours,
I will be your eternal garment.
You'll have a lot of friends with millions of dollars
Everything will humiliate you
You'll be alone in your eternal dwelling
It's only me, your talis, that you'll take with you