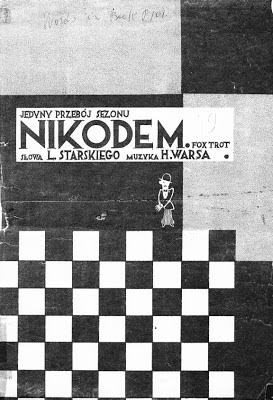 When my band Mappamundi was making the Cabaret Warsaw cd, we were looking for songs from the 1920s and 1930s which had both a Polish and a Yiddish version, and this song was one of them.

We wondered which came first until I found, at YIVO, Ben-Zion Witler's copy of this published sheet music for Nikodem with his own handwritten lyrics, in Yiddish, tucked inside. In my later research I've found several Polish songs which he re-wrote for his own repertoire.

The Polish version is about an obnoxious guy who thinks he's hot stuff. Witler's version is more interesting - it's about the anthropomorphized concept of Poverty as a sentient creature who comes to live with you and, sadly, like a leech of an uninvited guest, will not leave.

We recorded it for our Cabaret Warsaw cd: Der Dales and Nikodem by Mappamundi. We sing two of the three verses Witler recorded and then just the chorus of the Polish version (Nikodem) by Starski and Wars.

Here's my translation of the Yiddish lyrics. For a charming description of "Der Dales" (Mr. Poverty) see the bottom of this post.


People cry and shout, it’s a terrible time,
The world's in crisis.
They’re right, times are bad, nobody has any money.
Everyone cries, everybody sobs:
Life these days is so ugly.
They look around, they blame, you know who it is?

Mr. Poverty, it's poverty, he reigns over everyone
Every Jew knows him well, he’s in every house
Poverty, poverty, it’s taken over everything these days.
Every dollar already spoken for,
There’s nothing left but poverty.
We suffer big troubles from him day and night.
He torments us, suffocates us, who thought him up?
Poverty, poverty, for bridegrooms and brides
In every house a lot of poverty,
Good lord, how does one stand it?

I went to a wedding - hear a fine thing
I'll tell you what happened,
I'm not ashamed in front of you.
"Pay up the dowry!" shouts the bridegroom, "Here, give us the cash!"
But because the wedding had already happened,
All he got was... (chorus)

I came to the theater today, "The street of human woes"
There'll be a full house tonight, it makes my heart happy.
People crowd around me and yell "We want to see you perform!!"
But when I show them to the cashier's window they answer me nicely:
"Well, we would go, but..." (chorus)

From Born to Kvetch by Michael Wex:


Note how close dales comes to being personified, to taking on the traits of a real, living person. ... And what does this humanized dales do? It whistles from every side, in every corner; it makes its presence felt everywhere in a most unpleasant and annoying fashion... why does it whistle when it could blow the house down? "Because a fife is all it has" - i.e., it can't afford a sousaphone.