To hear (or even buy) the whole song visit our cd at Bandcamp: 'Oy mame shlog mikh nisht' on Lebedik Yankel

This song is about, I think, a modern fad making its way into the villages: marriages made by the young couple without benefit of matchmaker. "You, mom, are the only one who didn't know he loves me and wants to marry me." They sealed the deal in the usual way and now there is no point in getting on the girl's case - it's 'too late.' That was not the shtetl way, but there was no stopping it...

This picture is from the Facebook page of Yiddish Florilège. 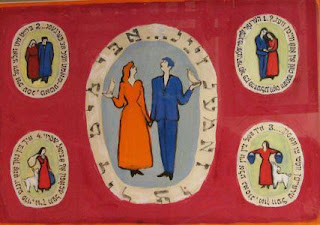 My translation of the Yiddish lyrics:

Oy mame, don't beat me, hear me out. Yankl the furrier (or
cap-maker) came in my house. I got so confused, and
meanwhile he stroked me and kissed me.

Oy mame, don't beat me, don't plague me,
You're my protection in such an hour
I said no, he said yes. Oy mame, it's too late already.

Oy mame, don't beat me, listen: I told Yankl this
wasn't good! Yankl answered, "It's no crime," and meanwhile
he kept kissing and petting me.

Oy mame, don't beat me, don't ask any more!
I myself don't really know what happened. He kissed me
and petted me so long that he finally convinced me.

Oy mame, don't beat me, don't drive me from the house. You
are the only one who doesn't know I love Yankl. He promised: when I say
the word, he'll marry me immediately.