Thanks to Roger Lynn Spears for playing piano on this one.

You can find this song sung by David Eshet, Max Zalkind, and Henri Gerro, with lyrics similar but not identical. I took down this version from a Henri Gerro recording at the Medem Bibliotheque, but Zhelonek cites Sam (Sem) Goldberg's (unfindable) recording, Syrena Grand Record 5455, "Dos idische Fidele."

UPDATE: Now you don't have to go to France to hear Henri Gerro's version, it's on Youtube: Dos Fidele.

A very pretty story was once told, there used to be a King David from Israel. He always used to play upon his holy fiddle, a pretty tune, a beautiful mitzvah. And the angels, hearing it, took heart, they would dance in a circle. The child's inheritance remains: love of the fiddle that puts spirit back into him. Oy, take the fiddle, the beautiful fiddle, and play a little tune, sugar sweet, the sweet hands, it goes into all the bones, it's so sweet. With a fine style, with such feeling, so take that fiddle, with a tune, and with feeling. A happy tune - play, play, play

My grandfather Reb Yisroel used to tell a story of the Jews, musicians of long ago. Enemies drove him from land to land, and only one thing remained to him: his fiddle in hand. He went from land to land, his heart was angry. But take your fiddle in hand and play your tune with feeling. The fiddle tells about what hurts deep in my heart, that all of life is a sad game. And suddenly it becomes happy, one hears consolation from the fiddle, that there will be more Jewish celebrations. The fiddle tells a happy song, that the Jew will never be vanquished. 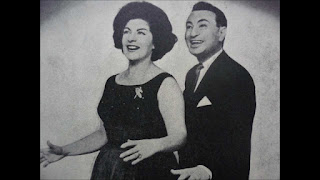 Henry Gerro was born in 1919 in Rovno, Russia. He sang, but also played violin and clarinet. After the war he moved to Buenos Aires where he died in 1980. This is a picture of him with Rosita Londner.

Thank you for including my cousin Henri Gerro in you archive. He was one of great Yiddish stars of his time. Henri Gerron and Rosita Lodner were married and both recorded and performed together. Also, Henri Gerro was a great favorite of Art Raymond on WEVD in New York