Click the album cover to hear and/or buy this track from our cd In Odess.

Here's a live video of Samet un Zayd aka Samet und Seid or, as on the label of Anna Hoffman's 78, Somid in Seid: 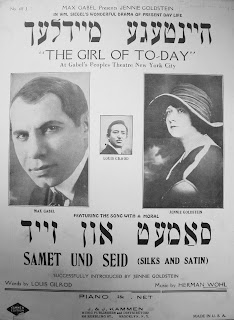 YIVO has the sheet music, the song was composed by Herman Wohl & Louis Gilrod. Zhelonek references the recording by Anna Jacobowitz on Syrena Grand Record 5276 'Samet un Seid from the melodrama Blinde Frauen' (Blind Women) but it's Jennie Goldstein on the sheet music "featuring the song with a moral" from William Siegel's "Hayntike Meydlekh" (Girls of Today). There is a very dramatic reading of the second verse in Anna's version. Anna Hoffman recorded the song in 1917 as Somid in seid.
Like In dem hoyz vu men veynt un men lakht which I've also put on this blog, this song has a severe disconnect between the cheerful, jazzy tune and the grim story of a girl who ends up DEAD because she likes fancy clothes. 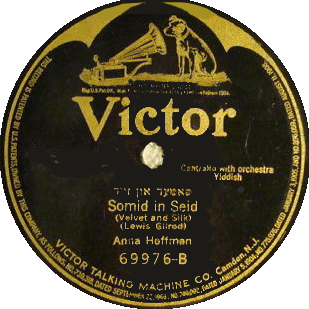 Roger Lynn Spears played piano and Randy Kloko drove up from Florida to sing on this song and a few others that are coming up.

A guiltless girl in a poor land blooms like a beautiful flower. She gives herself to a rich guy because she thirsts for money and glory. The rich man buys her innocence for a silk shirt, her love for a penny. Her life's strength disappears, the rich guy appeases his appetite, then he pants quietly.

Velvet and silk can't heal the anguish and suffering of a sick soul. How empty to sell virtue. She gambled her youth on velvet and silk. What good is silk that brings suffering? The hearts cut to the bone. People admire a cheap dress on an honest girl more than velvet and silk.

Late at night the ambulance brought a beautifully dressed girl to the hospital. Fate brought her to drinking poison because a rich man deceived her. She was dressed in velvet and silk, her face white as chalk. When night turned to day she was already dead, a sacrifice to velvet and silk.

Labels: battle between the sexes, modernity, songs for sale