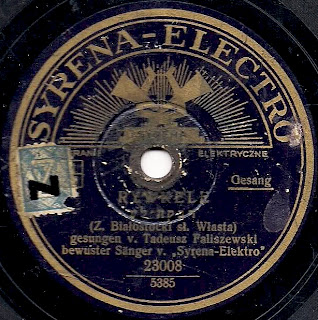 The tango Rebeka was perhaps Polish Jewish composer Zygmunt Białostocki's most beloved and often-recorded song. It's said that people requested it so often at the nightclubs, they would request it a second time while it was still playing the first time! Bialostocki used snatches of familiar chasidic niggunim (melodies) to tell the story of a poor Jewish shopkeeper's assistant who falls in love with a handsome goy when he comes to buy newspapers and dreams of a better life with him...

There are loads of wonderful vintage recordings of the song, in Polish, on youtube.

See my post of two years ago regarding Ben Chasin's remembered Yiddish version of this song. His Yiddish version is like a sequel to the Polish original text by Andrzej Włast: in his, she does run off with the nobleman and her family bewails her loss. His version scans exceptionally poorly as many of the Yiddish parodies do.

In the Zhelonek collection, a different Yiddish text is attributed to the singing of Tadeusz Faliszewski. This text is also lousy, I fear, but in the interests of completeness I decided to record it. This one was live and very rough, done with guitarist Ken Bloom in my living room a couple weeks ago.

Bret Werb, musicologist at the Holocaust Museum, opined that perhaps this label does not prove Faliszewski sang the song in Yiddish - after all, Wlast is still credited as lyricist - but the fact that the Yiddish lyrics included in the Zhelonek collection are not a translation of Wlast's text, but are themselves a different continuation of the story, makes me think he did sing in Yiddish. Unfortunately, though the label has surfaced online, the record itself is still lost, and the flip side ("A Mameniu") is another of the lost songs from the Zhelonek collection. How I yearn to hear this recording!

Here is the translation of the Zhelonek text:


He saw her first when he went to buy something
And after that time would go often and ask her "Be mine,
I'll shower you with gold. I'm the town's nobleman.
Put aside your pauper's clothes.
Wait, I'lll make you a queen. I won't ask more than a small dowry.
For me you'll convert [to Christianity], and in my palace I'll take you to me..."

Oh, you my destined one, your sweet words are as beautiful as you are
But my father and mother and the whole town will curse me:
"Rivkele the small charming beautiful one has run off with a Christian
And instead of a synagogue she goes to church."
I'll only be your friend. A huge outcry in town, that would be a real horror
My father and mother would cry, my brother and sister and the whole house
This is my beloved. Your sweet words shall remain holy and pure
But our love, our holy love, must remain a dream.