The wonderful jitterbug pictures are by William H. Johnson.

You can listen to the whole song (and even buy it) at bandcamp: Oy vey me shoklt zikh on "In Odess". 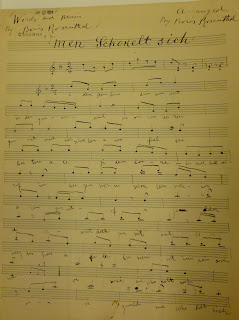 This is another of those great songs which start out in the synagogue and leave by the back door. From Wikipedia:


Shuckling (also written as shokeling), from the Yiddish word meaning "to shake", is the ritual swaying of worshipers during Jewish prayer, usually forward and back but also from side to side. This practice can be traced back to at least the eighth century, and possibly as far back as Talmudic times. It is believed to increase concentration and emotional intensity. In Chassidic lore, shuckeling is seen as an expression of the soul's desire to abandon the body and reunite itself with its source, similar to a flame's shaking back and forth as if to free itself from the wick.

Boris Rosenthal wrote this song in 1923 and he called it Men Schokelt Sich but on his own recording it's spelled Mi Shokelt Sich. The lyrics are by Jacob Jacobs. The song was featured in the Joseph Rumshinsky operetta "Mazel Tov" but Zhelonek heard it in Nellie Casman's hit show "Der Khasndl."

Ken Bloom played guitar on this cut and gave it a nice French gypsy beat.

My translation of the Yiddish text:

Jews pray in the big synagogue and they shockle tirelessly. They pray to the Creator, they pray to heaven. They bow, they shake, they don't stop, they don't get tired. Even if the shul bursts into flames he doesn't worry about anything.

Oy vey, one shakes, oy oy, little pretty maidens and wives. Shaking with all one's might, every one staggers/shakes, one stands and shakes, gevald, there's smoke

A boy goes to the theater with a girl and they amuse themselves very well. He takes the girl by the arm and they have a rendezvous. And they stand there in the corridor for a couple of hours. No word is said, they stand in one place. They don't get tired at all. Gevald, what's going on there?

Khaym Shmuel married off his daughter today. There was dancing almost all night. The guests are almost all gone, it's almost over, on a honeymoon the pair are traveling away. The train goes as quickly as the wind. Now guess what that couple is doing now...

The ship goes to America, twelve or fourteen days, and it shakes you up and down. Almost the whole voyage. It's really terrible trying to survive the journey. One eats without appetite, one goes in one's cabin, it gets quiet, you lie down to sleep, what do people do then?