UPDATE: Reposting to add the animated video I did today. Nobody ever listens to the automatic videos created by Routenote of the songs from our cds so I thought I'd make one today and see if it gets some listeners:

Here's something very interesting about the fellow I called here (in the second verse) "Vayzote" but who, it seems, is called in Yiddish Vayzuse and whose name is also used for "idiot." He was Haman's youngest son. You can read a great blog article about him, from the Mayrent Institute blog, here: Vayzuso. And there is a wonderful recording from way back in 1901 made by Dave Franklin, "the king of comic singers." A great song and a great read! 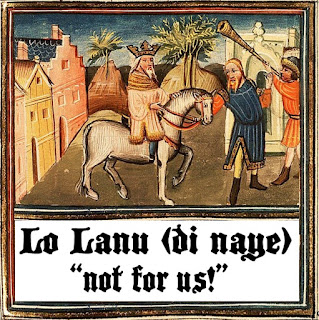 Click the picture to listen to and/or buy this track, Di naye lo lanu, from our Lebedik Yankel cd. Aviva Enoch plays the piano on the cd.

(Picture: Mordechai on his horse, as mentioned in the song!)

And here is a live concert version with Roger Lynn Spears playing piano:

This song was printed twice in the collection (once in 1929 and once in 1934) which indicates it must have been pretty popular! As with "Di Naye Al Chet" and "Me Shoklt Zikh," the song begins in a religious setting (pious Jews praying at Sukkot and waving their lulavs). It plays with the line from the Halleluja, "Lo Lanu" (not for us but for you, God) and the similar "lo eleinu" which means more or less, "let it not happen to me/us!" Having set the proper context, it then wanders off and applies the concept in a more secular context.

Aviva and Roger both do a great job of interpreting the accompaniment as heard on the Herman Fenigstein 78 found at Harvard's Judaica Collection. (Fenigstein sings the same first verse as noted in Zhelonek's book, but his second and third verses are different.) Although ordinarily I adapt lyrics to standard Yiddish (because that's what I know), in this case many of the rhymes won't work unless one sings "Lo lani" (what he sings sometimes sounds more like "Loy lani") so that's what I did.


My translation of the Yiddish, with thanks to Sheva Zucker and especially Professor Shalom Goldman of the Duke Divinity School who helped me make sense of this:


Every Jew prays with the esrog and shakes the lulav when it's Sukkot. Reb Betsalel runs into the shul early morning on Sukes, he shakes the lulav during the "Hallelujah" and prays "Lo Lanu" - and is there a Jew anywhere who isn't singing with him? Over there by the praying stand Reb Sender is praying the Lo Lanu, and old Moyshe Natan is shouting it with a gevald. Reb Getsl and Reb Tsadik are getting all excited, the rabbi, the judge, they're all shouting Lo Lanu ["Not For US!".

Who is there that doesn't remember Haman the hero who wanted to wipe the Jewish people off the map. A ruling came from the capital of Shushan for all us Jews. His wife, that witch, poured out troubles on him, hah hah, I like that. Haman became the sacrifice, he went to the devil, they hung 'em all, kids, especially Vayzote. Mordechai on his horse. Haman deep in the earth: let him be the sacrifice! Not for us!

These days there are many young guys whose only goal is to get a girl with lots of ready money. When a boy gets a girl with a fat business, she also has to be appealing. If she doesn't have a thousand dollars and a store on Vloshtshizne street the bridegroom shouts Lo Lanu. And who wouldn't want that from his wife? All shout together in a loud voice Not For Us!

I love a girl, Sally, she has a shop in the market, Lo Lanu
All the young guys have one goal, a girl with cash, Lo Lanu
Even my father-in-law, the widower Reb Natan,
he wants a thousand dollars to become a bridegroom
But you, maidens, shout loud with all your strength, NOT FOR US!